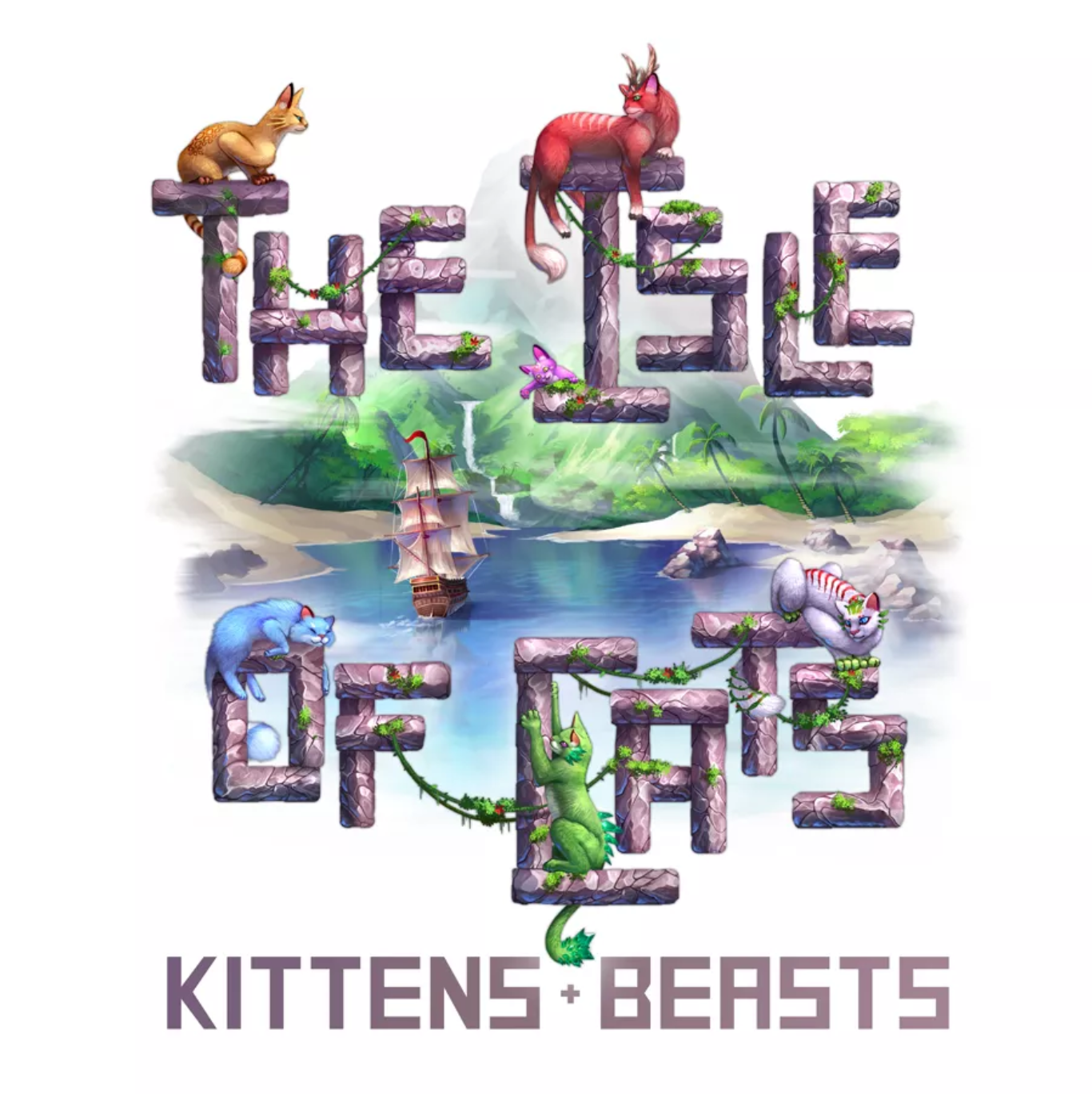 Summary: “Azrah: War of Heralds is a complete tactical card game for two players. Both players build their own fantasy party using a roster of “Guardian” characters, then use their party to defeat their opponent. Each Guardian draws from a familiar fantasy archetype, such as the Paladin, Warlock, and Assassin. Azrah features elements of deckbuilding, drafting, and resource management, as well as a party-based combat system. Both players begin a game with five health. The objective is to reduce your opponent to zero health by defeating Guardians in their party.”

Summary: “The King has commissioned a magnificent Castle that will span the ages. The ones who build it will be blessed with riches, power, and Renown for all time. This is where you come in. To build a Castle require workers, and your Guild is ready to answer the call. You are one of the few, the clever, and the devious, who aims to scheme and expand power by any means necessary. Use care though; the King will visit the Castle and Inspect it to make sure that everything is to his liking. If he finds you have been participating in shady deals, he will strip your Guild of its Influence and resources. Claim credit for building his Castle and prove to him that you are the greatest Guild in the land.”

Artist: Darrin Michelson (Dice of Crowns, Dice of Pirates, The Seals of Cthulhu)

Summary: “Dice of Dragons is a 1-6 player cooperative game, with players taking on the roles of valiant adventurers fighting a dragon that has captured gold from the Realm. Capture the gold from the dragon and win the favor of the Crown. This game also integrates with Dice of Crowns and Dice of Pirates allowing for an expanded way to play.”

Summary: “Eva expansion enables ultimate solo & advanced multiplayer experience with Myraclia board game. Not only you can play solo against this cunning opponent, but you can even challenge two powerful eternal beings and feel the experience of the full-fledged 3-player game. And as each of your virtual opponents is pursuing its own strategy, you can never know what to expect.

Consisting only of a drafting board extension and shiny cube, Luna may appear gimmicky at the first glance. But this single chunk of metal holds divine powers never seen before. It adds to an already tense drafting mechanism precious Element everybody craves for that tests the will and self-restraint to their limits.”

Base Pledge (w/shipping): $15, Luna expansion only

Summary: “Forsaken Forest is a team-oriented social deduction/horror game set within a mysterious forest which has been warped by dark magic. The goal of each player is to navigate to their team’s hidden destination, or to kill all of the opposing team’s players. However, the Villagers begin the game without knowing who is actually on their team, or where their destination is located within the forest. The evil Forsaken have perfect information and will do anything to mislead their opponents. On the path to victory, players will need to gather information, manage their resources, gain the trust of their fellow travelers, and fend off the evils of the night.”

Publisher: All or None Games (Dicetopia)

Summary: “Goons is a euro-style strategy board game in which the players will try out new thrilling careers as henchmen throwing themselves right into the heat of the fire! The goal is to cleverly manage your energy, earn as much cash as possible, get cool new gear, increase your reputation on the streets, and back the villains that will be the most beneficial for you in order to get as much victory points as possible.

The Junkyard Expansion introduces a brand new Junkyard location to finally give players a chance to do something useful with all those annoying junk cubes laying around. Just snatch a junk cube, take it to the Junkyard, and trade it for something useful. Just keep in mind that the Junkyard might want a little something in return. The expansion also introduces 5 new Items to throw your money at. Get a hold of a super gnarly skateboard, badass nunchucks, a can of refreshing Knuckle Soda, gloves, or a butterfly knife. And of course, 4 more zany Villains with new Schemes presenting new risk, rewards and challenges.”

Base Pledge (w/shipping): $38, The Junkyard Expansion only

Project: The Isle of Cats: Don’t forget the kittens!

Designer: Frank West (The City of Kings, The Isle of Cats, Vadoran Gardens)

Publisher: The City of Games (The City of Kings, The Isle of Cats, Vadoran Gardens)

In The Isle of Cats, you are citizens of Squalls End on a rescue mission to The Isle of Cats, and must rescue as many cats as possible before the evil Lord Vesh arrives. Each cat is represented by a unique tile and belongs to a family; you must find a way to make them all fit on your boat while keeping families together. Complete lessons, fill your boat, and keep cat families together to score points, and the player with the most points after five rounds wins.”

All-In (w/shipping): $274, everything Isle of Cats to-date and more, including the new Explore & Draw game with promo

Summary: “St. Lô marks the return of a true wargaming classic by Joseph Balkoski brought up to date with improved rules and art. St. Lo was the first game to cover this unique battle. Designed by Joe Balkoski, creator of Atlantic Wall and Sixth Fleet, St. Lo offers a challenging system for the simulation of WW2 battalion-level combat.”

Lockup: A Roll Player Tale is a competitive worker-allocation game for one to five players. In the game, players manage groups of minions — gnolls, kobolds, bugbears, goblins, or insectoids — locked up in Kulbak Prison. Each round, players try to keep their suspicion from the guards under control while allocating their crew to different locations within Kulbak. The player with the strongest crew in each location at the end of each round gains the most resources, hires the most powerful crew, and builds the most powerful items, increases their reputation. The player with the highest reputation at the end of six rounds, wins the game.”

Summary: “In this expansion you will explore megalith ruins on a new island, utilize magical relics, and command new forces that move between Cruelty and Mercy for powerful effects. Inside the box you can find new player cards for existing factions, a new Region deck for the Hinterlands that include the new Viratis faction, and special map Regions that contain powerful Megaliths instead of towers.

Path of Light and Shadow is a massive empire-building experience, combining area control, deck management, and civilization customization. As players vie for control of The Realms, they must enlist and promote supporters, outfit their burgeoning empire with powerful technologies, align with powerful leaders, and lay siege to rival exiles after the throne. Above all else, each player must decide what type of leader they will become, cruel or merciful. But choose wisely, for each path has its rewards and perils.”

Summary: “An epic fantasy cooperative campaign. In each of eight adventures (plus a bonus training adventure) you’ll build your character, acquiring powerful spells and weapons and increasing your abilities by defeating monsters, evading traps, and forging your path through choice-driven events, traps, and side quests.”

Summary: “Robot Quest is a 2-4 player deck-building board game of robot battles. Your battery cards give you the energy to move, power your weapons, and buy powerful new cards for your deck. Navigate around the hazards of the arena, and blast your opponents to score points. Destroyed bots respawn each round, so you’re never out of the action. Alliances are made and broken. The robot pilot with the most points at the end of the game wins.”

Summary: “Starframe Station has been caught in a black hole. All souls aboard are in peril. Luckily, a mysterious being referred to as Sekhem, has arrived aboard the Station and is offering salvation. In Sekhem’s possession is a prototype engine capable of bending space-time which allows any ship that uses it to escape the black hole. But there’s a catch. The engine isn’t powerful enough to transport the Station, only a single Starframe Ship. Sekhem will sell the engine to the highest bidder, but only accepts payment in the form of Hyper-Matter, which must be earned before the Station reaches the Event Horizon.”

Summary: “In Treasure Dive, players are immersed in deep sea exploration, attempting to collect all of the sunken treasures before their opponents do. Divers strategically travel around the board to find and recover hidden treasures, but must carefully navigate through murky waters, and keep out a keen eye out for their opponents.”

Summary: “If you’re comfortable with the harmonious blend of pinks and purples in the base game of Tussie Mussie, the Orange Flowers expansion is the perfect way to add a pop of color to an old favorite. Orange flowers push the player interaction with their diverse scoring: depending on which you find first, you may want to gather them all for yourself or spread them around the table. There’s also the Nasturtium, a potentially powerful (though situational) card that lets the player reorder their arrangement before scoring.”

Project: USS Laffey: The Ship That Would Not Die

Summary: “USS Laffey is a solo game of damage control as you desperately scramble to survive the most determined Kamikaze attacks of World War II. You will re-enact the harrowing 80 minutes of terror and mayhem the crew of the Laffey went through as they fought off 22 Japanese planes. You will move your damage control teams to stem the current crisis, and then roll and allocate dice in an attempt to aid the ship or damage the attacking planes. You could attempt to ask help from the nearby carrier Shamrock Bay, but doing so will take time and effort away from the current attacks. If you can survive the last Japanese attack with the ship still afloat you win.”

Publisher: Go On Board (Titans, Valhalla)

Summary: “Set years before the saga of Geralt of Rivia, The Witcher: Old World explores a time when monsters roamed the Continent in greater numbers, creating a constant peril that required the attention of expertly trained monster slayers, known as witchers. Five competing schools trained their adepts through brutal regimes, and once fully prepared, these now-recognized witchers set off to explore the land, seeking trouble and adventures and helping others for coin. Players travel across a vast map, embarking on masterfully penned quests, encountering and making ambiguous moral choices, fighting monsters — and sometimes brawling with other witchers to defend their school’s honor. The game lets players construct their own unique decks of cards by choosing from a wide range of abilities: attacks, dodges, and witcher combat magic — known as “signs.” Through card synergy, players aim to achieve powerful combos as they utilize their witcher school’s hallmark abilities to their full potential. Quests, battles, and even dice poker allow each player to earn money, obtain new items, and train their skills. The first player to acquire 4-6 trophies, with the number being set at the start of play, wins the game instantly.”