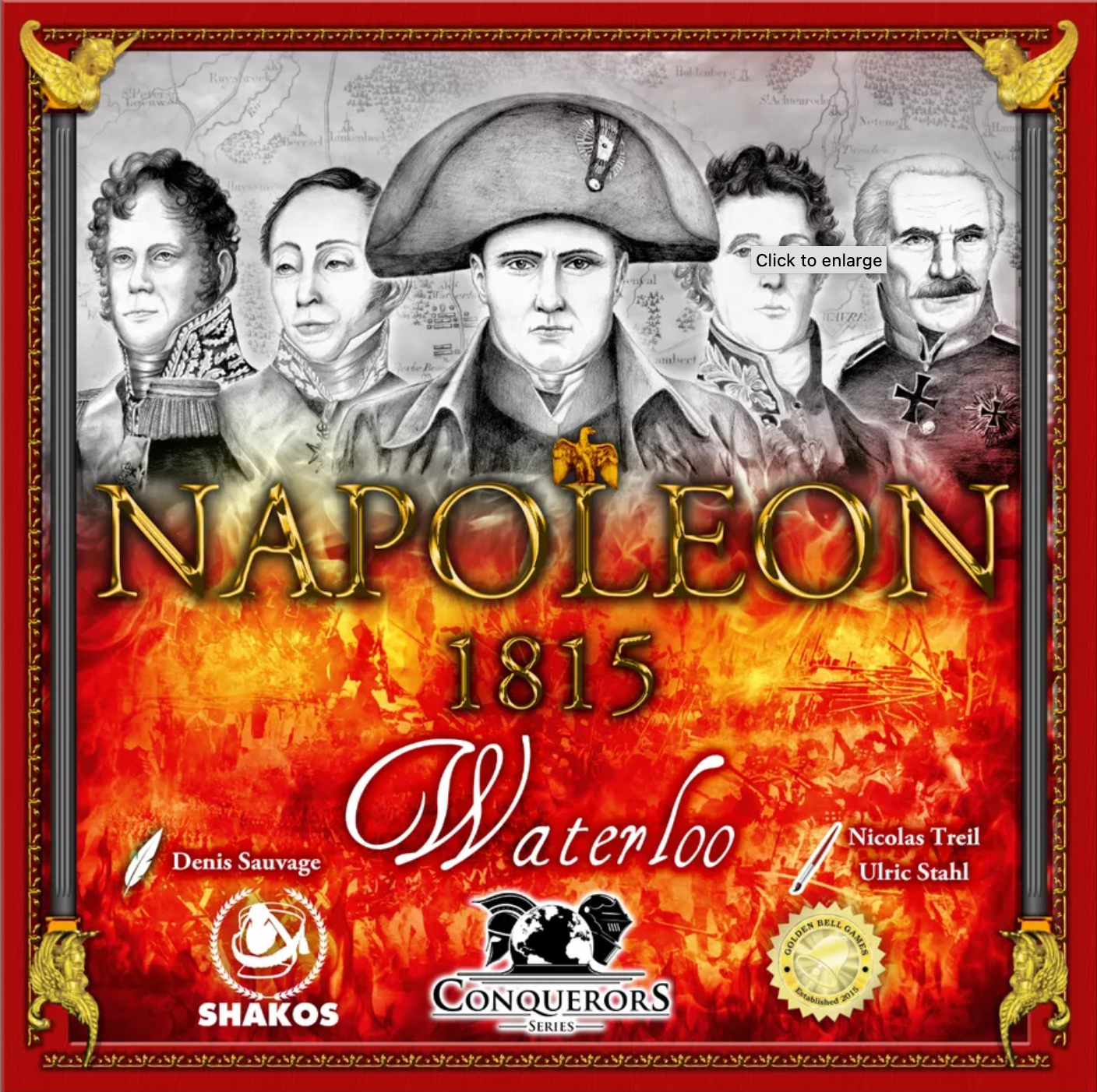 Summary: “Napoléon 1815 is the third installment in The Conquerors, a series devoted to the great strategists of history. Following on from Napoléon 1806 and Napoléon 1807, Napoléon 1815 brings its own unique challenges to this well-tried and highly acclaimed campaign system. For up to three players, assume the role of Napoleon, Wellington, or Blucher, making the key decisions that will determine the fate of Europe. As Napoleon, will you adopt your own version of his “strategy of the central position,” driving a wedge between the enemy armies and then annihilating each of them in turn? Or perhaps you will choose a different course, or find that change is forced upon you?”

Summary: “Patria Libre 1821 is a game that recreate the historic events occurred in Mexico (New Spain) 1810–1821 between the Insurgents who sought to separate from Spain and the Royalists who tried to prevent it. It is played with two sides, insurgents and royalists. The side that obtains more victory points will be the winner at the end. Use orders that will allow you to recruit, move, attack, and level-up your units, collect taxes or gain victory points, build a stronghold, or buy event or character cards. Your objective is to gain more victory points than the other side. To achieve this you must control key regions and use cards akin to your faction. Climbing rising in popularity will help a lot. Cards are essential. With them you can buy characters that joins your faction or event cards that will grant you interesting rewards. Popularity is very important in this game, if you have the support of the people, you will be able to strongly link your orders, however, without the people’s approval, your cause will dwindle. Historically, characters changed factions; this is also true in the game. So a few characters may change their minds over time, according to their preferences, sadly joining the opposing side.”

Summary: “A fantasy role-playing adventure with quests, encounters, card-based combat and character development. Inspired by games like Final Fantasy, Dungeons & Dragons, Zelda and Earthbound. Play team-vs-team game with strong team cooperation. Decide how you want to overcome encounters: combat, charm, tame, etc. Influence dice rolls using Tenacity – tokens earned when your character makes a mistake. Develop and level-up your characters how you see fit. Determine your fate by visiting camps where creatures and quests wait for you. Each turn, travel with your adventuring party, complete tasks on your Quest Cards to earn quest points and gold, and purchase items and abilities. In the event phase, you may discover a quest or encounter a friendly or hostile creature – complete the encounter to earn points and loot. Then, level up your characters. The game ends when a party completes 8 quests and/or creature encounters. After the final round, all parties enters a Battle Royale for extra points. The party with the most points wins the game.”