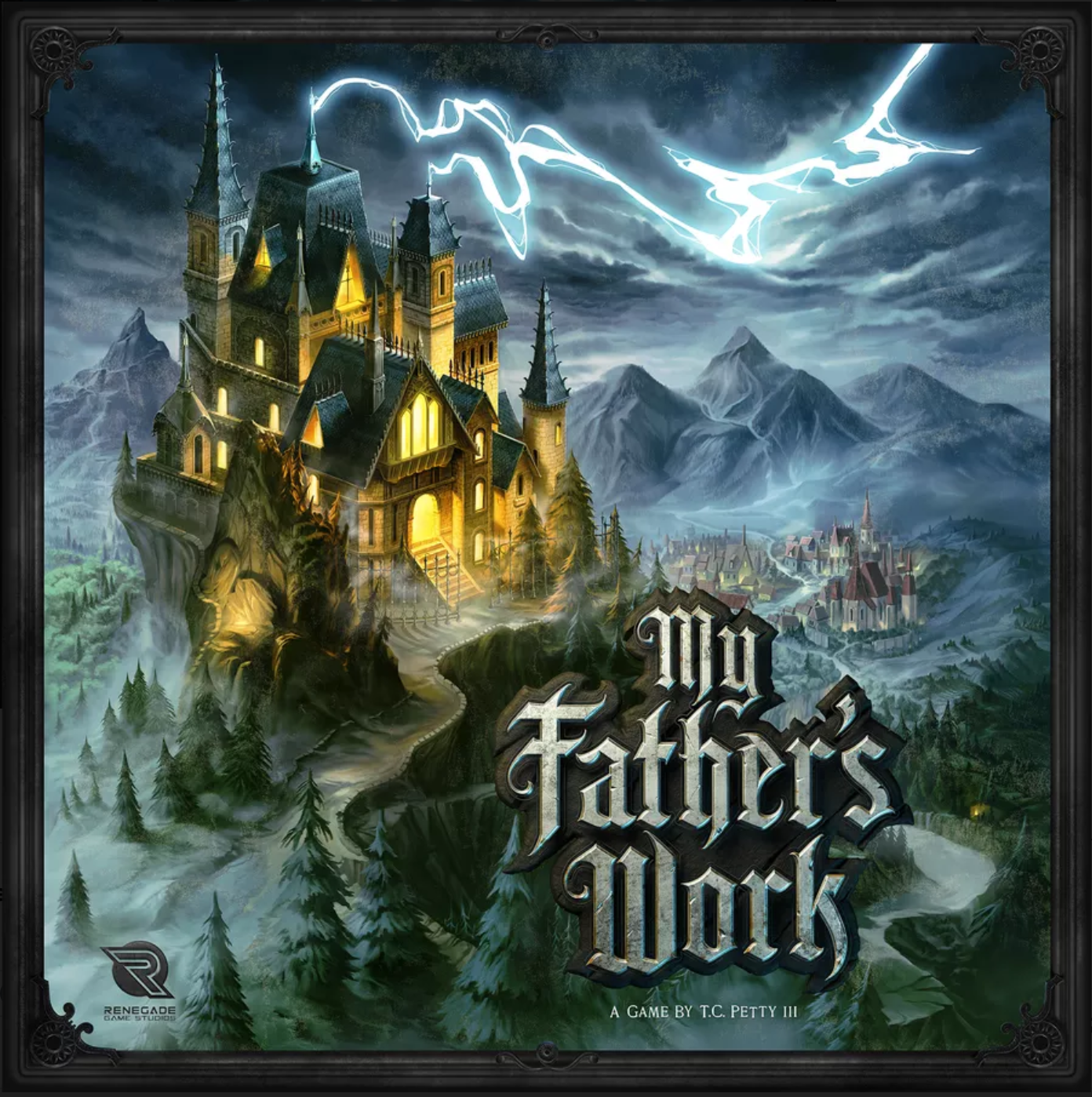 Summary: “Our Epic Edition takes Agents of SMERSH to a whole new level by focusing on the most Epic part of the game – The Story – while giving the graphic design a fresh upgrade and streamlining some of the older mechanics to provide a more focused, engaging experience. For example, where you travel to on the world map now provides you with different bonuses and upgrades amongst the many hundreds of unique encounters. Instead of collecting Intel just to win the game, you now collect it to locate and encounter Dr. Lobo’s Henchmen, and eventually Dr. Lobo himself. Henchmen and Dr. Lobo have their own individual “Choose your Own Adventure-like” stories and encounters. Defeat one or all of the Henchmen first and you’ll gain an advantage against Dr. Lobo in the End Game.”

Summary: “Your goal is to score the most points by gathering your favorite chocolates and avoiding chocolates you might find yucky. Each player has their own unique chocolate preferences which change from round to round. In this fast game with elements of drafting, push-your-luck, and memory, players compete to gather their favorites chocolates while avoiding those they might find unappetizing. Each round your preferences change, altering the dynamics of individual cards and what you want most.”

Summary: “The notorious mafiosi Don Falconi escapes again from prison, where he is held for illegal distribution of his ‘chili-boost’ sauce in his pizza restaurants chain. The police from the 3 city-districts is alarmed and tries to catch him, before he can flee the city. The game has 5 different playing levels from ‘easy’ to ‘diabolic’. By laying street cards, the street network of the city is build up and as the route of Don Falconi crosses with the routes of the police officers, the police might get blocked in the chase or manage to catch Don Falconi. If Don Falconi reaches an escape card, his escape was successful.”

Summary: “In this miniatures game take control of a team of 3 specialized Agents who will investigate in the open world of New Eden. In the near future, play as a group of heroes working for an Organization and trying to solve a string of strange murders in the heart of the city of New Eden. Build your strategy and send your Agents to the right locations to collect as many clues as you can in order to be the first to reach the conclusions of your investigation.”

Summary: “A solitaire game of espionage. You are the agent and go first, moving to an adjacent location and revealing a discovery card, which could be an item, clue, or bomb; item and clue cards go in hand, while bombs force you to discard. You can use a location’s special ability and clues to reveal case cards under files. You might be able to place a tracking bug on the spy. For the spy’s turn, the arrow cards move the spy to an adjacent location, where a new discovery card is placed at random. If the spy moves to your location, discard a card. If you can’t discard a card or discover you’ve discarded an item matching a case card, you lose immediately.”

Funding Status: Funded; currently at 139% with 9 days to go.

Project: Hellboy: The Board Game Expansions and Dice Game

Summary: “A cooperative board game about saving the world. Earth Rising isn’t about vanquishing evil or undoing some terrible plot… instead, up to six players must work together to bring the world into sustainable harmony. Balancing the needs of people with the limits of our planets biosphere, it’ll take strong co-operation and careful planning to reverse the damage done and transform our society into sustainability.”

Funding Status: Funded; currently at 421% with 8 days to go.

Summary: “Judgement: Eternal Champions is the revamped Version 2.0 of Judgement, the popular MOBA-inspired table-top miniatures game. In Judgement, you play the role of a young god who summons mortal Heroes to the shadow plane of Between to fight on your behalf. Your heroes must claim the effigy of your opponent in order to fuel your growing immortal power. If you control the Effigy Network, you control the fate of the universe. Each Hero is represented on the table-top by a finely crafted 32mm-scale resin miniature (PVC versions available) with incredible detail and dynamism. The Version 2.0 game board is now an artistically stunning battlefield with a hexagonal overlay that optimizes gameplay.”

Summary: “In King’s Trial, brave adventurers will compete in the competition of their lives – Get rid of the dragon and become the heir to the throne. Travel through the randomly generated realm, completing various quests for the king to gain his favor. Whether it be shooing away some evil sheep that are bothering the farmers, organizing a magnificent party in the local amphitheater, or gathering delicious pastries from a far-away village.”

Summary: “A head-to-head, card-driven area control game with a focus on tactical movement and deck design. Each player chooses a faction to play, and using the cards available to that faction, constructs an 18-card deck with which you do battle. You earn artifacts by controlling objectives and destroying elite enemy units augmented with alien technology. Once you have collected sufficient artifacts, you use them to construct a Wormgate. The first person to build a Wormgate, wins the war for the new sun.”

Summary: “Players are contestants in a reanimation competition hosted by the fictional monster building conference MONCON. The goal of the game is to collect body parts, assemble a unique monster, and harness a power source to bring it to life…think Frankenstein, but DIY. Players choose a unique heart card at the beginning of the game to guide their strategy and must assemble a monster that is compatible with the heart they chose. Every heart has unique requirements which heavily affect’s the players build strategy. Throughout the game, players take turns assembling body parts, upgrading parts, sabotaging their opponents, and using action cards to stir things up. The player who is able to reanimate their monster, and score the most points, wins the game.”

Summary: “Players are competing mad scientists entrusted with a page from their father’s journal and a large estate in which to perform their devious experiments. Players earn points by completing experiments, aiding the town in its endeavors, upgrading their macabre estates, and hopefully completing their father’s masterwork. But they have to balance study and active experimentation because at the end of each generation, all of their experiments and resources are lost to time until their child begins again with only the ‘Journaled Knowledge and Estate’ they have willed to them — and since the game is played over the course of three generations, it is inevitable that the players will rouse the townsfolk to form angry mobs or spiral into insanity from the ethically dubious works they have created. The player with the most points at the end of three generations wins and becomes the most revered, feared, ingenious scientist the world has ever known.”

Summary: “Imagine a dozen or so random humans, robots, and none-of the-aboves, each with their own abilities, goals, and secret relationships, have been turned loose on a space station that is going to be incinerated in approximately 15 minutes. You are one of these weirdos, and you have collaborators on hand ready to assist you in achieving your goals. There’s also definitely probably some sort of alien presence or murderous monster locked up on board, maybe. Stationfall is unbalanced, inasmuch as certain characters have overlapping goals with others, not to mention overlapping conspirators. Opposing identities are unknown at the start of the game. Their actions may be unpredictable, violent, or disrupt your plans. Or most likely all of the above. Due to the actions of your opponents, seemingly simple victory conditions may only be achievable through complex means. Stationfall is a box full of creative solutions, but that box is going to morph, twist, and grow teeth over the course of play. Your best turns will exploit the unique tactical freedom of being a secret conspiracy, as well as deductions about your opponents’ identities and motives. Stationfall is messy, intricate, and full of dangerous variables. Welcome to the Station.”