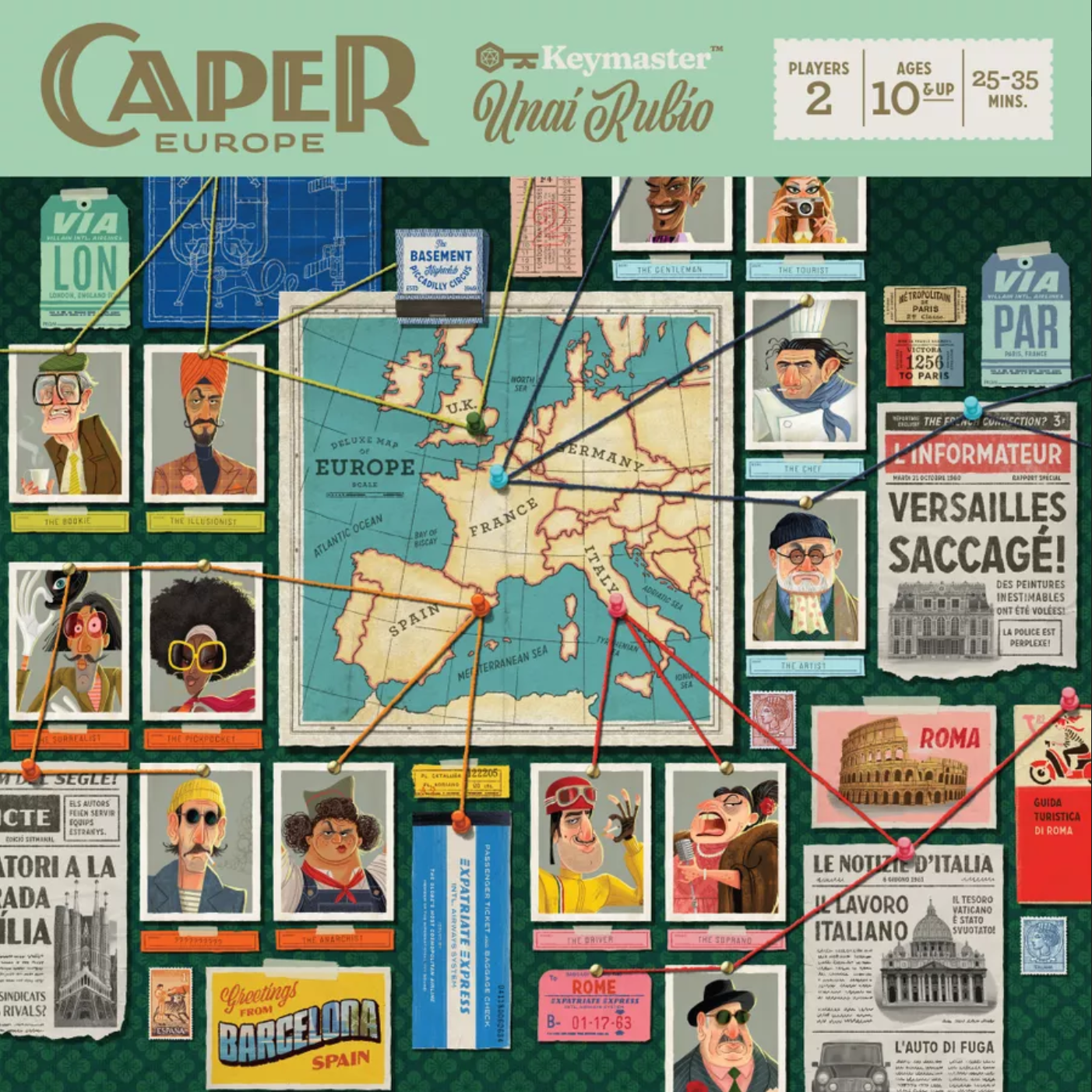 Summary: “A game built on the premise, ‘to survive a Bear Attack, you don’t have to outrun the bear, you just have to outrun your friends.’ What makes this game unique is the free-reign board with placeable obstacles and ‘the Bear’ as a self-sufficient and vicious pursuer.”

Summary: “A two-player abstract strategy board game based on sirens from Greek mythology. In the mythos, sirens were often depicted as either mermaids or winged bird-like humans whose hypnotic voices caused sailors to crash their ships and drown. In the game, each player is a siren competing to capture as many shipwrecked sailors in the open water as they can and return them to their respective island. The rings are the resource in the game that act as the siren’s voice. Use them to capture your opponents’ sailors, then call them to your island. The first player to bring four sailors to their island wins.”

Funding Status: Currently at 6% with 27 days to go.

Summary: “A two-player drafting game. You take turns sending thieves to famous locations across Europe, vying for control through special card powers. These thieves have tricks up their sleeves, which you can enhance by adding gear to them. And controlling the locations isn’t everything because priceless stolen goods await the thief who’s clever enough to snatch them first. Your goal is to score the most points by winning locations, collecting stolen goods, and equipping thieves with their preferred gear. The mastermind with the most points, tallied at the end of six rounds, wins.”

Summary: “Somewhere on a doomed and distant planet, life has emerged, competing for supremacy until the world’s inevitable destruction. The object of the game is to score the most points by the time the world ends. Score points by playing Traits for your Doomlings’ species, making them more adaptable, resilient, and mischievous. As your Doomlings assert their dominance, Catastrophes will befall the planet, causing setbacks for each competing species. When the third Catastrophe inevitably strikes, the world ends, and the Doomlings with the strongest set of traits gets to look the Apocalypse in the eye and declare…’I scored the most points!'”

Summary: “Like in a typical role playing game, you have a character sheet, roll for saving throws, fight monsters and find treasure– but when your character dies in the game you have to chug your drink in real life. It adds a real level of tension and excitement to the battles. Everything matters.”

Summary: “A strategy card game set in medieval times of magic. You play as the ruler of a growing kingdom, attempting to store more grain in 12 rounds than opposing rulers. To do that, you will spend silver to bid against other rulers on worker cards which produce unique goods or services for your kingdom. You will need to balance your silver and grain economies, and take some risks. The primary risk-reward comes in the form of FAMINE cards, which show up with increasing regularity as the game progresses. You can store as much of your grain as you wish to safety for a single silver coin. This makes it economically beneficial to leave your grain growing as long as possible. But beware– when FAMINE strikes, you will lose half of it.”

Summary: “Tulip enthusiasts explore Amsterdam’s tulip festival to build colorful bouquets, give tulips to others (scoring points in the process), and manipulate the value of the market. The deck includes tulips of four colors, with values 2-4. Lay out four festival cards based on the player count, with these cards showing the number of points scored for giving away tulips, keeping tulips, and having a majority of certain colors at the end of the game. Draw two cards of different colors, and place them under the festival cards in first and second place based on their value. Deal two cards to each player; keep one card face up in front of you and add the other face down to the ‘secret festival’ pile.”

Summary: “The peaceful city of Rowan is surrounded by dangerous monsters. It’s up to the citizens to fortify the city, train up warriors, clerics, knights, and mages, and defend Rowan in Meeples & Monsters, a bag-building engine builder featuring depth, replayability, beautiful components, and a splash of meeple humor. During a players turn, they draw meeples out of their bag, using them to perform various actions on the board, including upgrading their meeples, adding new meeples to their bag, fighting monsters, investigating towers, and upgrading the town, giving players even more options on future turns. At the end of a player’s turn, all the meeples they drew are put onto the “lodging” part of the player’s board.
During the game, players score victory points by defeating monsters, completing quests, and investigating towers. At the end of the game, players score additional victory points by fighting boss monsters and through end-of-game quests.”

Summary: “Play as a mermaid, shifting tides in your direction to collect valuable seashells and create a stunning collection. The game board features a 5×5 array of colorful seashells of different types. Five public objectives are revealed, showing players the seashells they want to collect — whether by type, color, or overall pattern — on their 3×4 treasure chest board. You receive two secret objectives, keeping one and discarding the other. If you wish, you can play with each player taking a mermaid character (each has a unique power) and a moonshell, which serves as a wild seashell.”

Summary: “The American Wild West, 1860. After a tiring trail, you have finally arrived in Oil Town – a boomtown that attracts pioneers from all around the land with its never-ending flow of black gold. With your allocated drilling rights in your hands, you gather a bunch of helpers and set foot on the intimidating oil field. After walking around for a while, you notice the dowsing rod suddenly starts to twitch. In this moment you realize – it’s time to strike it rich.”

Summary: “A game of action selection and action rotation, using an innovative Turn Phase Token that requires you to decide when to turn the token, as it costs an Action (AP) to change sides. By turning the Turn Phase Token, players can collect and trade resources, and use these resources to fuel their further actions. By synergizing their strategy, players can Hire and Promote Employees and Build and Upgrade Locations, proving Victory Points and access to further strategies.”

Summary: “A medieval-themed card game. Build your Kingdom, damage everyone else’s; the winner is the last Kingdom standing or the strongest one at the end of the game. Each player starts with a Fort and some Land, which they can fortify with Walls, Moats, Battlements, Hills, Archers, Knights, and Traps. Using the cards in the deck, you then defend your Kingdom, attack the defenses of other Kingdoms with weapons, and aim to control the fate of your opponents with Earthquakes, Sabotage, Mutiny, Spies, and more. Mercy cards also allow a lifeline for each player.”

Summary: “You are the ruler of one of six alien races, each with their own special powers, which inhabit the lesser-known moons of Uranus. Until recently, your people have been living peacefully in underground dwellings to protect themselves from the noxious gases on the surface. But now you are besieged by violent and increasingly frequent asteroid attacks, which are causing irreparable damage and threatening your very existence. Working together with the other rulers, you must rally the troops to build infrastructure and develop technologies that will protect you from the asteroids and will ultimately allow you to escape. Use your race’s special powers to help you and your neighboring moons, which are suffering the same fate, to settle on Uranus before your moons explode. This is a co-operative game; players work together to try to beat the game. Players win the game if they manage to get all of the moon races housed in completed modules on Uranus before the moons explode. No race must be left behind.”