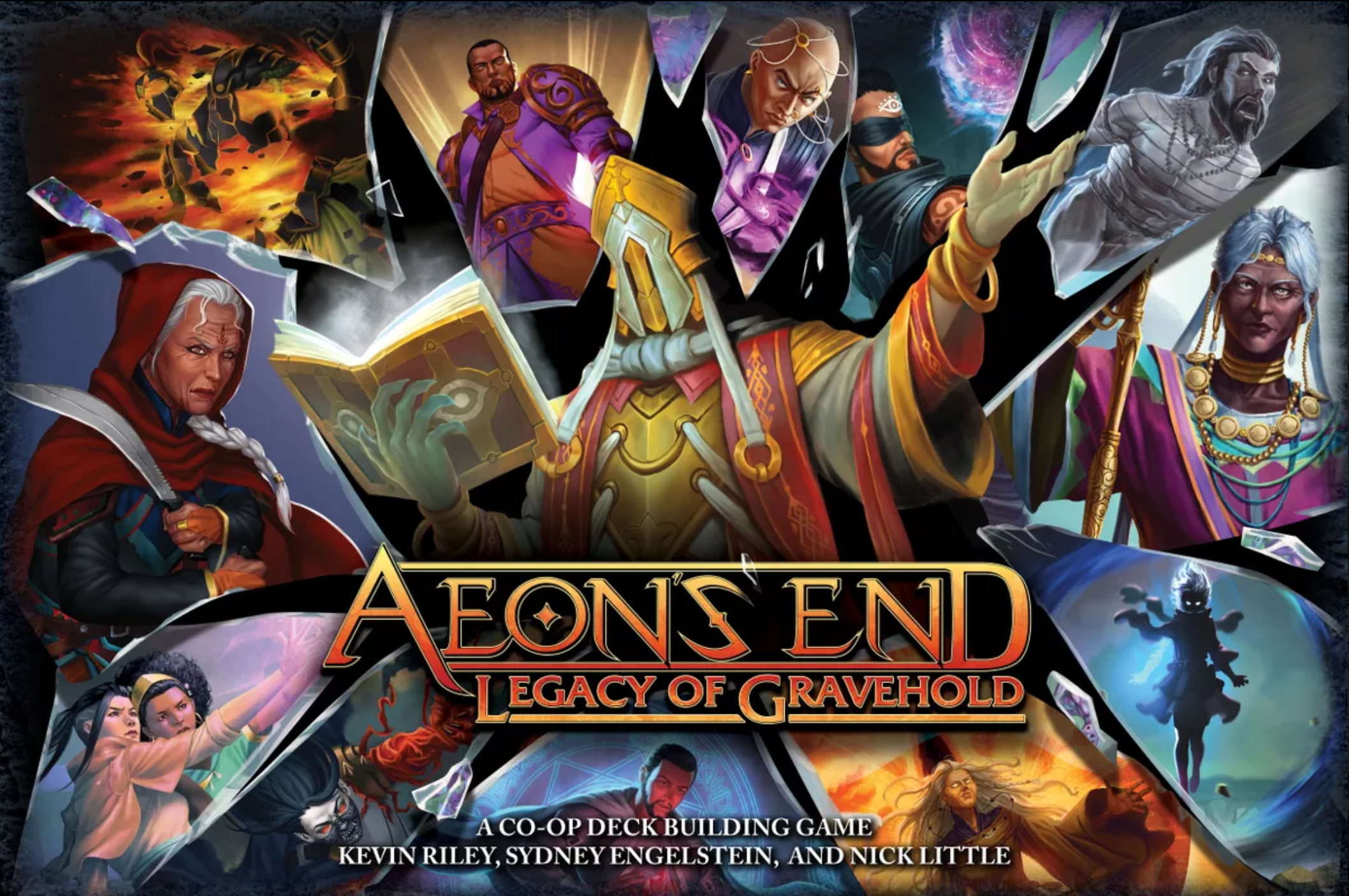 (or here’s a list of what launched yesterday that might deserve a closer look… and Project Titles now feature links to their campaigns!)

Summary: “Aeon’s End: Legacy of Gravehold is the second legacy game in the Aeon’s End line of games.  Legacy of Graveholf has a deeper, more immersive narrative with branching paths. After each game, players will receive experience. They will spend that experience on enhancement stickers, those along with player cards will allow the players to become more powerful. However, the nemeses that players will face grow stronger and stronger with each battle.  Legacy of Gravehold has more than twice as many mages as all previous base sets, and more than twice as many nemeses as well.”

Summary: “In the solitaire Batman: The Dark Knight Returns Board Game, you play “The World’s Greatest Detective,” who’s been pulled back from retirement into a gritty Gotham. Do everything you can to beat back a relentless tide of ruthless mutants, cops, and press looking to bring you down. Instead of traditional leveling up, this is a game of attrition. An old Batman tries to survive one final gauntlet, facing old and new villains — such as Two Face, Billy Berserk, and The Joker — and even his most powerful ally, The Man of Steel himself. The game is playable as standalone “missions” or one epic playthrough in which the results of each mission carry over to the next.”

Summary: “A strategic Eurogame that incorporates aspects of trading, bidding, voting for policy change, and cutting deals to benefit your businesses. There are multiple routes to success, allowing everyone to be on the edge of their seat right to the end. The Island has long been ruled by the sophisticated elites. Their corruption has weakened the resolve of its inhabitants. For too long the corruption, greed and unethical ways of a few have been the detriment of the masses. Today marks a day of change: the day you take back the Island for the people. Use your business savvy to beat your opponents and gain the respect of the Island.”

Summary: “Nowadays, the gnomes of Sweetland are a happy and irreverent people, because their ancestors created the Legendary Chocolate Spring, with which they were able to invent the most delicious candies and desserts. Players control gnomes trying to fulfill their objectives around a 3D map, using special weapon and utility cards to power up their moves and rolling dice to defeat their goblin enemies and get advantage against their fellow gnomes.”

Summary: “Chamber of Wonders is a special boardgame in the fact that the dynamic setup defines the set of rules that will be used in each game. Completely different game mechanics are added or removed to the game, either by using defined setups or by completely randomizing the game board – your choice. With more than 150 combinations of areas and contacts, each game feels different from the previous. Your objective is to set up the best Chamber of Wonders by sending your Agents to London’s various areas, collecting Wonder Cards, and placing them into your Display Cabinet.”

Summary: “In Crimson Company, two opposing players take on the roles of adventurous noblemen in a cutthroat fantasy world. In a battle of wits, they assemble armies of sell-swords, from hardened warriors and shady merchants to mythical creatures as old as time. Your goal in a match of Crimson Company is to conquer two of the three castles in the center. You conquer a castle by amassing more strength than your opponent in the castle’s lane by the time that lane is scored. A lane is scored once a player owns at least four cards in it. The Wildwood Tales expansion adds a new set of mystical creatures to the Crimson Company roster. It also includes a 5-card set of vanilla cards without effects to make it easier to introduce new players to the game.”

Summary: “A social deduction card game of choices. In Dawn, players come together to try to build a village together in the hills of ancient northern Europe.  Some players will want to work together to build a flourishing community, but the temptation will always be present for people to underhandedly seek glory at the expense of everyone around them by building up their own personal treasure.  Will you work together, or are you only in it for yourself?”

Summary: “In a not very distant future big corporations fight over control of space. You play as the head of a corporation exploring and exploiting the moons and asteroids in the outer parts of the solar system. A quick playing game where you outwit and fight your opponents. Plan your moves and use the gravity of the planets to strike your enemy and reach the resources you need. Build mines and factories to grow your fleet of spaceships. Win by building the combination of structures your company requires.”

Summary: “Shortly after the fall of the Russian Empire, a rumor claims that the Czar’s favorite daughter, Anastasia, survived and has been in hiding ever since. After years of searching, the Empress, Anastasia’s Grandmother, invited those who claim to be or know Anastasia to a party, where the Empress hopes to learn enough to find Anastasia. Anastasia is driven home by her urge to reunite with her family, risking life and limb in the process. Meanwhile others are hoping to benefit from the Empress’ fortune and favor by pretending to be Anastasia. Will the Empress find Anastasia or will this story reach a different conclusion? Finding Anastasia is a Social Deduction game for 1-8 players and takes about 10 minutes per player to play.”

Summary: “Every player will begin a game with 9 random cards dealt out in front of them. Players take turns stealing, replacing, switching, and collecting cards in a race to be the first to line up three rows or columns of the same suit. Every card in the game has a suit and an ability. There are 15 suits and each of the 5 abilities in all of the suits (15 suits x 5 abilities = 75 cards total). The suits are what players are trying to align while the abilities help you to get and maintain your cards’ order.”

Summary: “Take on the role of a group of kids and their newfound alien friend, and explore Wode Ridge looking for evidence of the town’s supernatural happenings. But be wary, the Darkness knows you’re on to it, so it’ll be trying to get you before you get it. Find enough evidence to figure out what monster is currently ailing the town and then defeat it before time runs out and the Darkness overtakes you.”

Summary: “A fast-playing tense struggle between the rebel player (The Maccabeans) and the empire player (The Seleucid Greeks) trying to reassert their control. This two-player game plays in about an hour or two, with a lightning fast set-up time. The Greeks start in their unassailable supply centers, controlling Jerusalem, but the Maccabeans can use ambushes to whittle their foe while cutting off the Greek supply.”

Summary: “An economic game like no other, with its peculiar setting and Orcish humor. Compete to establish Companies in ten different industrial sectors. Companies in each industrial sector generate income or losses, and grant players abilities that can be used during the game. To win the game a player needs to be the first to found 10 companies on the game board or sometimes even less if they successfully fulfill business quests of Greed, Rage or Dare!”

Summary: “Take on the role of a Viking clan using Runestones to mark your clan’s claims of land. In the advanced game, your clan worships one of these powerful beings from another realm who lends you their power to help you outwit rivals and claim territories for your clan. At the end of the game, the clan who controls the most territory in Midgard wins.”

Summary: “A standalone expansion to The Red Dragon Inn, with new characters, new drinks, and a new pub crawl variant.”

Summary: “Root: The Marauder Expansion introduces two new factions, new gameplay options, and a new level to the conflict for the woodland: Hirelings! These small factions can be used at any player count and introduce surprising new power combinations as well as a chess-like tension to lower player count games of Root. Finally, The Marauder Expansion also includes a new set-up draft system suitable for both casual and competitive play.”

Summary: “Have you or a friend ever said, ‘I wish I had a boba shop and could drink boba all day?’ Make those dreams come true with this card game that’s fun with your friends and perfect for the whole family.”

Summary: “SINS is an aggressive push-your-luck deck-builder. Every turn, you can either activate actions, gain power or give despair. Shuffle the sins cards together and deal 5 cards to the middle of the table to form the Realm. From here, you can buy or gain new cards throughout the game. Deal 10 starter cards to each player and draw 5 cards into your hand. The most sinful player at the table, is the starting player. Play cards each turn to activate actions, gain power or give despair to your opponents. Push your luck and resolve for dominance. When a player has 1 dominance, that player is the winner.”

Summary: “In Tiny Epic Dungeons, players control a band of Heroes exploring a treacherous dungeon in search of the fearsome Dungeon Boss. Heroes make their way through the dungeon one room at a time. Around every corner goblins and ferocious minions seek to block the Heroes’ path. Where there isn’t an enemy, traps are set, ready to spring on even the most prepared Hero. Tiny Epic Dungeons features a modular dungeon that is unique with each play. The game is played over two acts: The Dungeon, and the Dungeon Boss. In both acts, the players are constantly struggling against the waning firelight of their torch which decreases each turn. When the torch goes out, the Heroes are forever lost in the darkness.”

Summary: “A frantic race game for 2 to 4 players where you program the movements of your tiny toy car in advance, with a sliding puzzle acting as your remote controller. Choose your car, grab your remote controller, create the track, and get ready to race! At the beginning of each round, players will have to work their way through their sliding puzzle controllers simultaneously, trying to create the sequence of actions they want their car to perform during the round.”

Summary: “Take on the roles of heroic adventurers banded together to defeat the monsters inhabiting a nearby lair. Play heroes from nine different character classes, each with unique abilities to help vanquish foes. Double-sided hero cards provide both male and female versions of each class for a total of 18 heroes from which to choose.”

Summary: “There is turmoil in the little village called Wutaki. The villagers believe they angered the giant monster, which they worship as their god, and thus the big volcano is going to erupt. To soothe the monster the village elders will send out workers to collect resources to be sacrificed later fulfilling powerful pacts. Each village elder is wielding power over an elemental tower, which element responds to certain pacts to gain more rewards. Beware of the other elders and their powerful omen cards which they will use to bring your reign to an end. Use your power for good or let the world of Wutaki burn. You decide!”