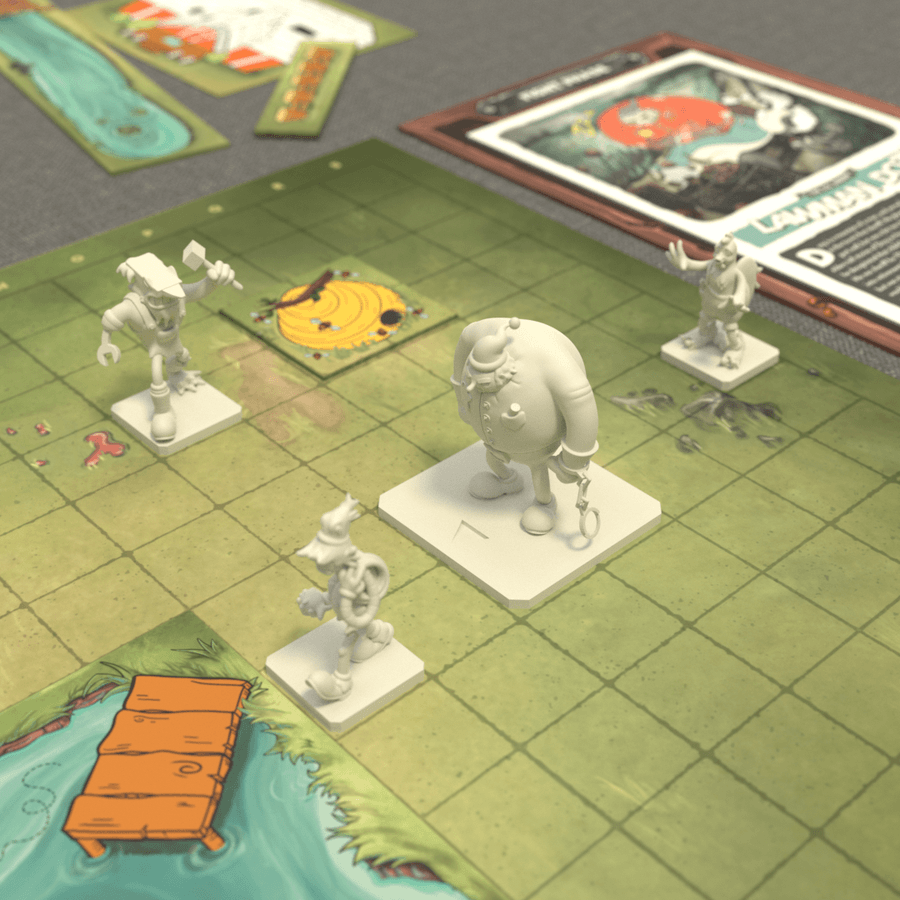 Summary: “Bios:Mesofauna is an alternative Bios:Megafauna. That is, it starts and ends at the same time. It follows the same sort of Achterbahn environment, same climate change, same or similar creeples, same VP, same tiles, same card colors, same cratons and drift, same basic and Achterbahn games, same catastrophes, same greenhouse, cloudiness, and oxygen. Same terrestrial settings. The setting is the same, only the animals are smaller.

Galenus is a worker placement game where you place up to 6 action pawns and then decide when and how to resolve them. In this way some players can still be placing pawns while you are already resolving them. You can choose to cure patients, which will gain knowledge in one of four types of ailments, publish works based on that knowledge, show off your skills in the theater, acquire medicines to aid your work, rest to rejuvenate your own health, or adopt a new philosophy. At the end of the round you compete in medical contests via blind bidding that may give you more prestige. Whoever has the most points gained from these various tasks or first publishes 8 works wins the game.”

Summary: “A space themed competitive card game. Players act as Captains and command a fleet of spaceships holding valuable cargo. The deck is made up of cards that can protect your ships, attack opponents ships, and interact with another player’s actions. Choose your targets wisely as the game may require you to form an alliance to stay alive. The game ends when one player has all their ships destroyed with the winner being the one with the most valuable cargo remaining.”

Summary: “Pick a squad of three champions, position them strategically and use their abilities and mystical artifacts to control the ever-changing tide of battle in an attempt to obliterate the competition.”

Summary: “The Call explores challenges Early Christians faced inside the Church as they struggled day-by-day to live in their new-found freedom of grace. The Call is an expansion to Commissioned, a cooperative game with a simple deck-building mechanism where players are the early Christian Apostles and must work together to mature their faith decks, grow the church, collect the books of the New Testament, and overcome persecution.”

Project: Darkest Dungeon: The Board Game

Summary: “Gather heroes, brave the darkness and face the lurking abominations in this cooperative, rogue-like, RPG dungeon crawler” and video game adaptation. “The game is played in campaigns of 11 missions.”

Summary: “Players control one of two sides: the Royal Order and their giant robot known as the Hexgyas or the Grandragon and dragonewts bent on extinction of human race.”

Summary: “Get rid of your cards first, win the battles, and collect treasure points for your team. Be ready to lead and to follow; attack and hold your ground. The world of Elemies demands balance.”

Funding Status: Currently at 6% with 28 days to go.

Summary: A co-operative strategy game re-implementing Defenders of the Realm in which superheroes “race to protect their home city and its inhabitants from an onslaught of villainy from Baron Blade and his criminal cohorts. Each player must master their character’s unique abilities to manage multiple crises throughout the city of Megalopolis.”

Project: Here be Dragons – Into the Unknown

Summary: “Combines the tactical play of a strategy game with the character building of a roleplaying game to create a brand-new adventure. Compete with other explorers by earning victory points and survive the consuming darkness of the Devourer.”

Summary: “You and your fellow private detectives are aboard a majestic cruise ship when the lifeless body of one of the occupants is found in their luxury suite. The prime suspects are the twelve occupants of the VIP cabins on the upper deck. They are the only ones who could have had access.”

Funding Status: Currently at 9% with 19 days to go.

Summary: “Set in the Italian Renaissance, this game will guide you through a fantastic, mythical campaign based upon the historic events of the war between Rome and Venice in the early 1500s. Nova Aetas: Renaissance is a reimplementation of Nova Aetas. This new, improved version, is born from the experience gained during these years and will give you an even deeper experience by immersing you and your group in a charming and mysterious Italy, full of historical characters such as Leonardo da Vinci, Caterina Sforza, and many others – both real and imaginary.”

Summary: “A worker placement style game where players are deploying their agents around the globe collecting fragments of intel. These fragments are then promoted to an actionable state that can be used against a high profile target and earning player’s influence — the currency in the game. As the players gather intel from a city, intel is also leaked to other cities thereby potentially helping other agencies. Additional agents can be deployed but at a cost. Furthermore, handlers can assist with exchanging intel thereby giving the agency the leg up. At end of four rounds of play, agencies will bribe their high profile targets for more influence. In the end the player with the most influence is the winner.”

Summary: “Players compete to summon the most valuable objects and creatures. The player who manages to obtain the highest value cards after six cards have been summoned from the gates wins the game”

Summary: “A co-op boss battler set in a vintage cartoon universe. In each game, your goal is to take down four unique Ruffians, each one tougher than the last. You’ll build up your townsfolk with gear, explore Eureka Springs, and concoct unique strategies to take down even more unique hoodlums.”

Funding Status: Currently at 7% with 28 days to go.

Summary: “A competitive, fast-paced card game where players take on the role of an Archeologist and compete to become the ultimate Treasure Hog. Thieves lurk in the shadows and your riches could be stolen at any moment! Players use resources from their hand each having value ranging from one to three, hogging as many treasures as possible on their turn. The more value used to gain the available treasure, the less chance another player will be able to steal your riches.”

Project: The Treasure of Montecristo Island

Summary: “A physics-based space board game with fast and kinetic gameplay. Story driven missions are designed for players as individual commanders or teams. You’ll encounter asteroids, defense stations, powerful automated enemies, and many other surprises.”

Funding Status: Currently at 5% with 27 days to go.

Summary: “A fantasy table-top role-playing game featuring an ever-changing map, a choose-your-path adventure guide, and 16 inspiring characters to choose from. ”