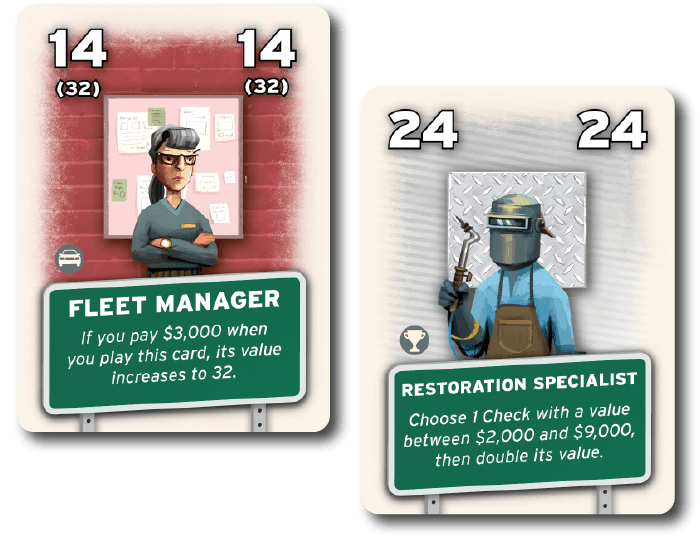 Summary: “A fast-paced music-themed strategy card game where players race to collect a winning set of groovy musician cards for their band. Players can steal band members, recruit powerful supporters and play game-changing event cards along their journey to playing their band’s first gig. But to play a gig, a player’s band must first contain musician cards with enough matching genre icons.”

Summary: “For Sale Autorama is a quick game about buying and selling vehicles: cars, motorcycles, RVs, semi-trucks, etc. During the game’s three distinct phases, players first bid to hire advisors, with those advisors then assisting them in the other two phases of the game, when the players purchase several vehicles, then attempt to sell them for the greatest profit possible. For Sale: Advisors adds a third phase to the classic game For Sale, with players starting the game by bidding to hire advisors who will then assist in the second and third phases of the game when players acquire houses, then sell them.”

Base Pledge (w/shipping): $13, For Sale: Advisors expansion only

Summary: “An open-world, adventure board game where players set out on a trek as one of 12 unique Gem Hunters. Travel across the board which contains a diverse number of regions and locations that have unique opportunities and dangers as you set out to complete your quests and become the Master Gem Hunter.”

Funding Status: Currently at 8% with 33 days to go.

Summary:  “The Blessed Dark is a cult-themed mint-tin card and dice game.  It features a mix of push your luck and light take that elements.  Players work to build out a Grimoire of spells, gather the blood resources to power them, and conduct rituals (rolling the dice) to see what primordial energies that can harness to summon demons or trigger spells.
In Starforge, each player starts with an asymmetrical faction of constructible ships made from custom acrylic game pieces.  In the center of the table is a row location cards that can be conquered and mined for resources.  Through their choice of tactics, and how they build their ships, the players can battle and outwit their opponent achieving victory by command points, resource capture or enemy destruction.
Castle Siege is a 2 player competitive castle combat game where the last structure standing wins.  Build up your fortress to defend against invaders and plot carefully to smite your enemy’s Keep with creatures and weapons.  Trolls, boiling oil, archers, fireballs– nothing is off limits in this stronghold smack-down.  Playable on a table or only in your hands and fingers, there is truly no limit to where the battles can take place.”

Summary:  “A fast and furious fairy-tale fighting game that is driven by deck-building and inspired by classic 2D video games.”

Summary:  “Play as a divine being who has sired a demigod in the realm of humankind.  The identity of your lineage is known only to you. Use positional play to complete quests—and influence fate to ensure the outcome is in your favor.  Strike the perfect balance of misdirection and mischief to capture the throne.  Part social deduction, part strategy, Veiled Fate pits wit against wit.  Every move is a new clue to discovering the true lineage of your opponents.”