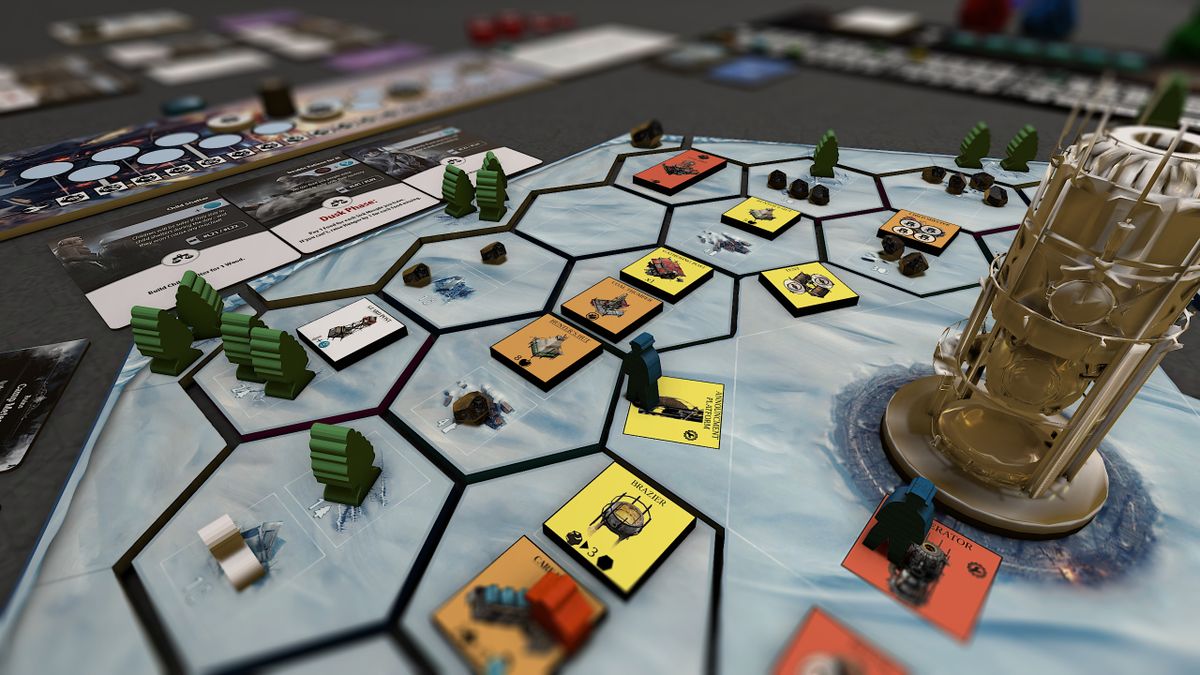 Project: 13 Monsters: Armed to the Teeth

Summary: “Each player takes the role of the magical traveling storyteller of old — The Bard. A player’s deck represents their repertoire of ballads, stories, techniques, tricks, magical items, fantastical lore, and enchanting melodies that you will use to battle your opponent to win the hearts — and purses – of the folk of the land. During the game, players use their cards to perform Songs and collect Fame. The game ends when a player accumulates 15 Fame and has no currently active Songs.”

Summary: “The standalone sequel to the critically acclaimed map-drawing game Cartographers. It includes all-new map sheets, scoring cards, explore cards, and ambush cards with unique abilities. Cartographers Heroes can be played on its own or mixed with components from the original game for a greater variety of gameplay possibilities.”

Summary: An expansion to dexterity game Dungeon Drop, and a bluffing game where players “compare mighty deeds in a strategic game of boasting and oneupmanship.”

All-In (w/shipping): $84, both games plus the Dungeon Drop base game, plus extras

Summary: “Paul Bunyan, Johnny Appleseed and friends have 12 weeks to prepare for winter in the epic struggle of human versus nature. In this cooperative, dice-rolling campaign game for 1-4 players, the heroes work together to battle fearsome critters and the oncoming cold to gather and build everything they’ll need to survive.”

Project: Frostpunk: The Board Game

Summary: “Take on the roles of leaders of a small colony of survivors in a post-apocalyptic world that was hit by a severe ice age. Their duty is to effectively manage both its infrastructure and citizens. The core gameplay will be brutal, challenging, and complex, but easy to learn. The citizens won’t just be speechless pieces on the board. Society members will issue demands and react accordingly to the current mood, so every decision and action bears consequences.”

Summary: “An anime-themed card game featuring competitive one-versus-one battles, a distinct two-deck draft system, and Japanese sci-fi art. Players assume the role of one of the game’s many Gunners and equip their character with two guns available to them. Once selections have been made, it’s a frenetic race to kill each other.”

Summary: “A new, compact version of Herbaceous,” where players are “herb collectors competing to grow and store the most valuable medley of herbs.”

Summary: “You and your opponents are constructing skyscrapers in a somewhat unreputable city. You’ll move around the board on a one-way track, choosing any unoccupied space ahead of you and doing its action, and waiting for everyone to pass you until you take your next action. As you play, you’ll be frequently tempted to enhance your actions, but whenever you do, you will gain Corruption. This can give you an edge over your opponents, and it can also periodically penalize you if you gain too much. You can win games with little Corruption, and you can win games with a lot of Corruption; it all depends on the decisions you make relative to your opponents.”

Base Pledge (w/shipping): $8, upgrade kit only

Project: King of the West

Summary: “A quick Weird West area-control card game that fits in your pocket.”

Summary: “Lie, cheat, steal, or simply play well to influence the next presidential election. It’s a game of risk and reward, involving scandals, animals, and all three colors of the American political spectrum.”

Summary: “A cross-over battle system. Characters from various game worlds come together to see who the true Paragon is. Pocket Paragons features a total of 4 game series on launch each with their own gameplay features all cross-compatible with one another.”

Summary: “An engine building and drafting game in which players are trying to complete projects in Alchemy, Reanimation, and more to finally complete their thesis statement and graduate from the Academy of the Dark Arts.”

Summary: Essentially a variation on Connect Four, with cooperative, multi-player, and plenty of other game modes to choose from.

Summary: “Relive one of the most famous trials in US history–a tense, tabletop duel where you sway a jury & a nation for swift justice. You, as the prosecution or defense, must convince a 9-panel jury that Mary Surratt, one of eight people put on trial for conspiring to assassinate President Abraham Lincoln and other members of his cabinet, is guilty…or innocent.”

Summary: “An expandable turn-based strategic fantasy board game. You’ll compete against other Dark World Stone Keepers while collecting as many Ancient Runes as possible.”

Funding Status: Currently at 1% with 19 days to go.