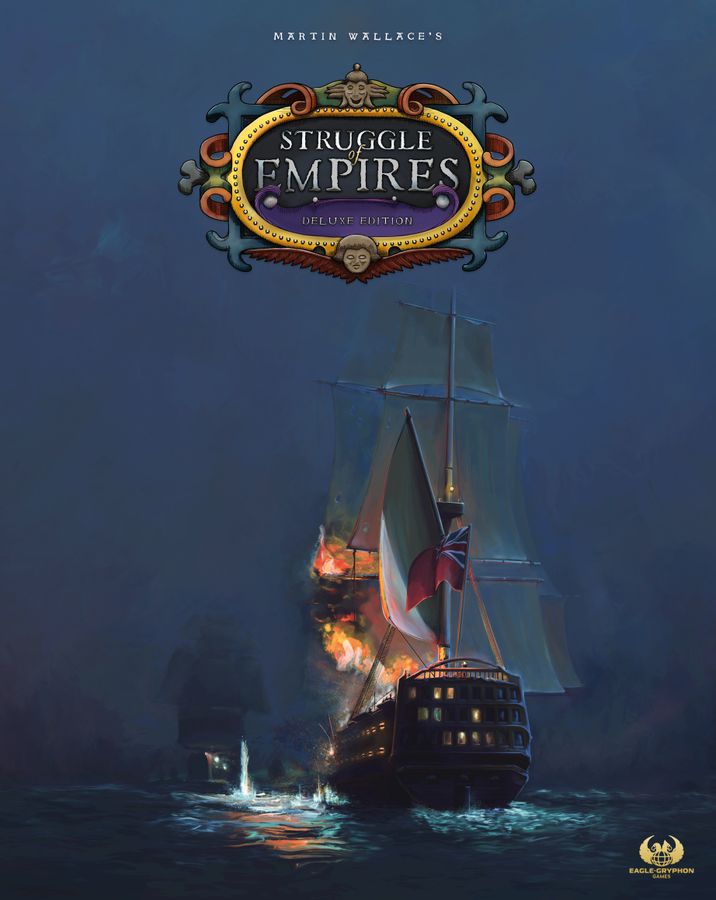 Funding Status: At the time of this posting, Martin Wallace’s Struggle of Empires Deluxe Edition is already fully-funded.  In fact, pledges currently total over 2x the initial funding goal with 3 days left to go on the campaign.

What It’s About:  A re-design of Struggle of Empires with new art by Joao Tereso, upgraded components, and several new variants. Play as one of seven European powers, directing that country’s military, economic, and political development. Forge alliances, build armies and fleets, establish colonies, improve your economy, wage war, and manage unrest among your citizenry while expanding in Europe, or taking control of American colonies, Africa, and the Far East.

How It Works: Struggle of Empires takes place over the course of 3 major Wars, during the 18th century, “an age of discovery and sail, a period of colonization and the beginnings of industrialization, and a time of almost constant warfare in Europe and it’s far-flung colonies.” Each war lasts for 5 or 6 rounds, depending on the number of players, and “each War begins with the formation of two grand alliances of the major powers and represents a period of approximately two decades.” Each War begins with a series of auctions in which players bid to determine the placement of their alliance status marker. And then, in each round, players will perform two actions, and if available, any number of bonus actions. Regular actions consist of Building 1 Unit, Moving 2 Units, Performing 1 Attack, and then Passing. Special Actions include Colonizing, Gold Coast Commerce (in which players a Neutral Country marker to 1 of their Control Markers if they have a Navy in Africa), Establishing a Local Alliance, Claiming 1 Title, or Using 1 Covert Action Token to either Incite a Pirate Attack or Incite a Colony Revolt. Free actions include Taxation (gaining 2 Gold & 1 Unrest), Using a Free Action Tile, and Using a Tactics Tile.

At the end of each War, players will Receive Income, Pay Maintenance, and Increase their Population, and then Assess Control for Victory Points. After performing these steps following the Third (and final) War, players with 20 or more Unrest will then adjust their Victory Points to 0. Then the player with the most Unrest under 20 loses 7 victory points and the player with the second-highest Unrest under 20 loses 4 victory points.

Comparisons:  The Unrest penalties certainly seem to beg comparison to Martin Wallace’s punishing loan mechanisms in both Age of Steam and the Brass games. And of course, there’s the general theme here of industrialization as the players oversee their growing economies. But the elements of 4x, including combat, paired with broader mechanics of civilization-building veer the gameplay in another direction, anchoring Struggle of Empires within a three-sided foundation that’s one part dudes-on-a-map, one part civilization-builder, and one part crunchy Euro, without relinquishing the game’s dependency on its economic engine. The 7-player count may also seem to invite comparisons to Scythe when playing with the Invaders From Afar expansion; but considering the variety of mechanics and scope to Struggle of Empires beyond simple resource management and action-selection engine-building, better comparisons may be Age of Empires III, Merchants & Marauders, an Clash of Cultures, with Clash of Cultures the most complex of the three, and rating an identical 3.59 to Struggle of Empires over at BoardGameGeek.

KS Exclusives:
None, but Eagle-Gryphon maintains there will be 90 days after the final shipments are received before the game is available at retail.