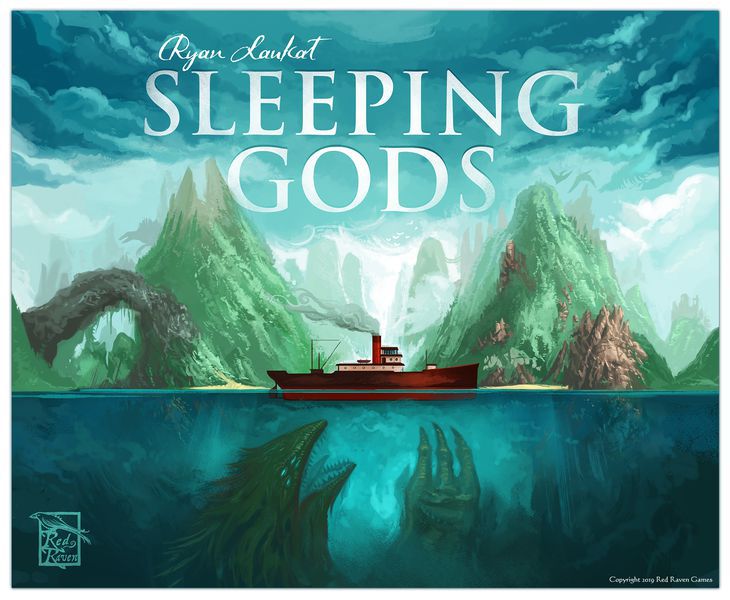 Designer: Ryan Laukat (Above and Below, Eight-Minute Empire: Legends, Empires of the Void II, Islebound, Near and Far)

Artist: Ryan Laukat (Above and Below, Dominion, Dominion: Intrigue, Eight-Minute Empire: Legends, Empires of the Void II, Islebound, Near and Far)

Publisher: Red Raven Games (Above and Below, Eight-Minute Empire: Legends, Empires of the Void II, Islebound, Near and Far)

Funding Status: At the time of this posting, Sleeping Gods is already fully-funded.  In fact, pledges currently total 16.5x the initial funding goal with 6 days left to go on the campaign!

What It’s About:  The latest storytelling game from Ryan Laukat and Red Raven Games, in the vein of Above and Below & Near and Far, but by far the most ambitious of Laukat’s storytelling games to-date, with an epic narrative not dissimilar to The 7th Continent.

How It Works: On a given turn, players a) Draw an Ability Card, then discard down to 3 cards if they have more, b) Gain 3 Command Tokens, c) Draw an Event Card and read the effect, which may or may not include a challenge to immediately complete, d) perform two actions (which can be the same action taken twice), and then pass the Captain’s Token to the player on their left. Actions the player may take include: Travel, or moving to an adjacent region; Explore, one of the regions with a red circle, which involves consulting the storybook; Prepare, removing Command Tokens on all Crew Members and Adventure Cards owned by the player; Search, in the region the player currently occupies, drawing a Search Token and executing it immediately; Gain Command, gaining 1 additional Command Token; Visit a Market Location, drawing 7 cards from the market deck and placing any the player chooses to purchase near their ship board; Visit a Port, paying 5 coins to use either the Inn (restore 1 health and remove 1 fatigue from each crew member), Shipyard (repair 1 ship damage, paying any number of resources to repair 1 additional ship damage each), or Spend XP (to purchase level cards for crew members). Players can also spend those Command Tokens whenever they wish, on things like: Train (equip an Ability Card), Activate a Crew Ability, and Activate an Adventure Card. Further mechanics in the game include combat and the challenges mentioned previously in relation to Event Cards.

When playing on normal mode, any of the following will trigger a failure for the campaign: a player’s ship health reaches 0 and it sinks; each crew member’s health reaches 0; a player is reduced to 0 on the Morale Track; or the Event Cards run out. A campaign takes 10-20 hours to complete, and can be “saved” from game session to game session.

Comparisons:  As mentioned above, both Above and Below & Near and Far, both designed & illustrated by Laukat and distributed by his company Red Raven Games, are great comparisons. They all involve story-telling books in games that are exploration-heavy. But Sleeping Gods promises to be more epic and much larger in scope than either of those two previous games. So perhaps the Kickstarter juggernaut The 7th Continent is a better comparison when considering ambition and scope.

KS Exclusives:
The retail version will not include the metal coins. It will likely also not include several of the stretch goals, but which ones have yet to be decided.

All-In Total: Sleeping Gods Ultimate Combo is the way to go if you want everything, but if you’re like me and you’re not much interested in either the Soundtrack or the Journal, try pledging for the $100 Sleeping Gods & Expansion, add on the $15 Battle Mat, the $15 Sculpted Resources, the $10 Metal Ship, and $15 in shipping for a total of $155. Or go full hog with the Ultimate Combo, the Resources, Metal Ship, and shipping for $190.

Sleeping Gods completes its Kickstarter on Thursday, August 29th and tentatively ships in May 2020.