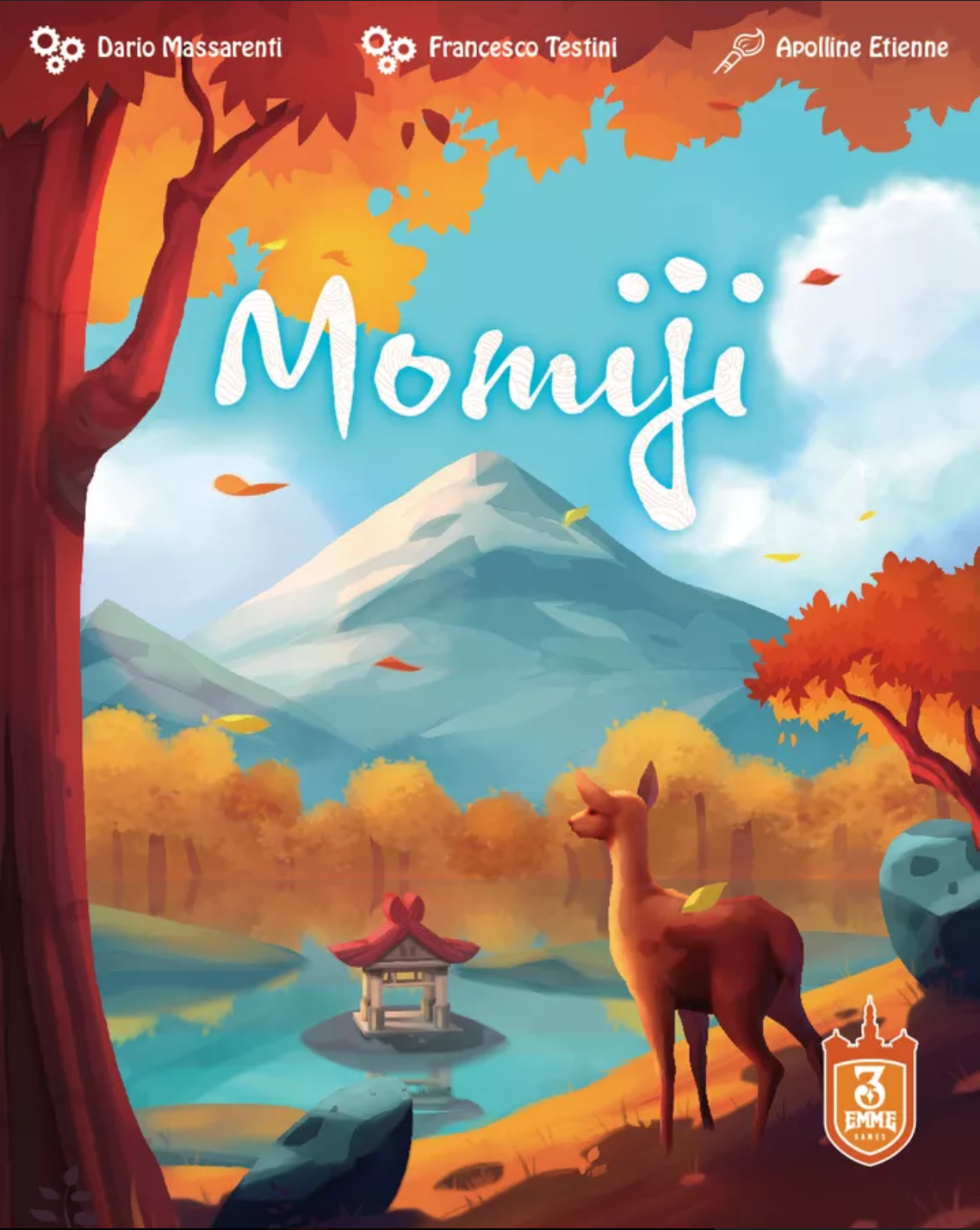 Funding Status: At the time of this posting, Momiji is already fully-funded. Pledges currently total more than 4x the initial funding goal with 5 days left to go on the campaign.

What It’s About: “Players try to attempt to fulfill their objectives by collecting the most valuable autumn leaves of the Imperial Garden making the most of their landscape abilities.”

How It Works: “Rounds proceed in clockwise order starting from the first player. During your turn, you can perform only one of the three main actions: A) Collect leaf cards from the general display; B) Play leaf cards in your personal area; and C) Activate an objective token. During their turn, players may also perform these optional actions: Use a landscape ability, and Discard any 2 cards from your hand to obtain 1 acorn token. You can perform one or both of them, but only once during your turn.”

When collecting leaf cards, “a player takes an entire column of leaf cards from the general display and places it in their hand. Before taking the cards, you can optionally return 1 acorn token to the general stock, to draw from the deck 4 new cards. Add them to the existing columns on the display, sorting them according to their type. Then proceed with the normal collecting leaf action.”

“Leaf cards are played in front of each player, in their personal areas, in different piles according to their type and starting from number “0”. They must be placed on top of each other: you will not be able to see the numbers on the cards below. On each pile, you can place a card showing the same number as the card below or a card showing the immediately following number.”

“The game ends as soon as the leaf cards deck is depleted or when there is no Torii token left in the middle of the table. Each player, including the one who triggered the end of the game, plays a final turn.”

“Discard the acorn tokens placed on the landscape tiles, then count your score as follows. 1) For each leaf pile in their personal areas, players earn a number of victory points equal to the number of cards in that pile, multiplied by the value shown on the topmost card (if a player has 5 cards in a pile with a “3” on the top, they obtain 15 points). 2) Pink acorn tokens worth 5 victory points each. 3) Yellow acorn tokens worth 1 victory point each. 4) Each completed objective token worth a certain number of points according to its condition: 10 points if the player who completed the objective is the owner of the token; 3 points if the player who completed the objective is not the owner of the token; if one or more players are tied, all players involved take 3 victory points except for the token’s owner who takes 10 victory points. The player with the most points is declared the winner. In case of a tie, the player with the most cards in their hand is the winner.”

Comparisons: Arboretum, Herbaceous, Kodama, Fields of Green, and Tang Garden all have a similar nature theme and are also generally of a lower complexity.

What Should I Pledge?:
$19 Momiji Base Game: a copy of the Momiji Base game with all unlocked Base Game stretch goals.
$31 Momiji: Deluxe Game KS Exclusive: a copy of the Momiji Deluxe Game (a KS exclusive), Momiji: The Ancient Garden expansion, and all unlocked Base Game and Deluxe Exclusive stretch goals.
$46 Momiji All-In: includes everything in the Momiji: Deluxe Game KS Exclusive pledge, plus the Falling Leaves Module, Metal Leaf Module, and Morning Dew Module.

Momiji completes its Kickstarter on Wednesday, December 23rd and tentatively ships in September 2021.