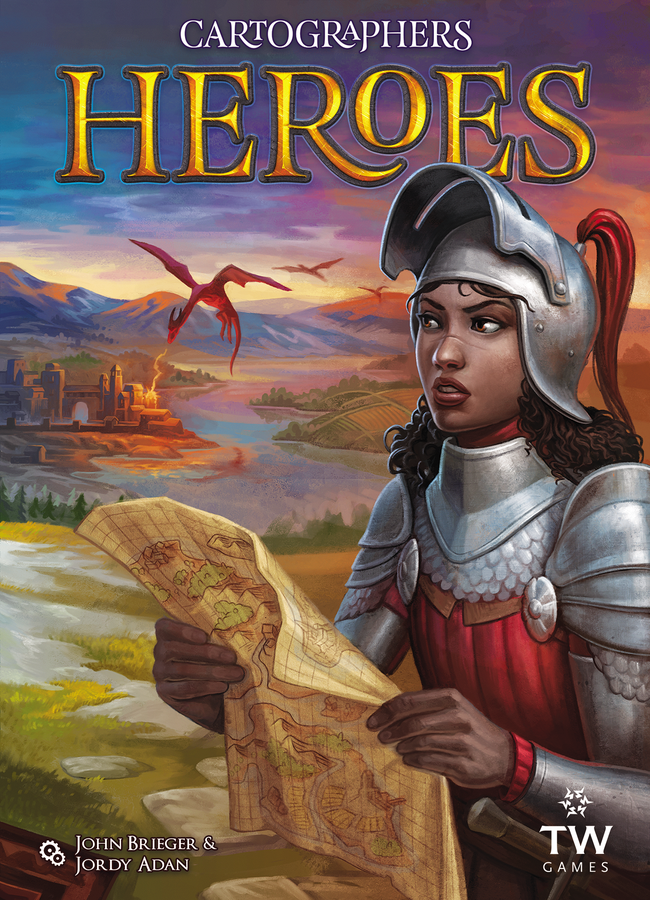 Funding Status: At the time of this posting, Cartographers Heroes is already fully-funded. Pledges currently total more than 16x the initial funding goal with 2 days left to go on the campaign!

What It’s About: “The standalone sequel to the critically acclaimed map-drawing game Cartographers. It includes all-new map sheets, scoring cards, explore cards, and ambush cards with unique abilities. Cartographers Heroes can be played on its own or mixed with components from the original game for a greater variety of gameplay possibilities.”

“The game is played over four seasons. Each season is divided into multiple turns, and each turn has three phases: the Explore Phase, Draw Phase, and Check Phase. At the end of each season, players earn reputation stars.”

During the Explore Phase, a new card is drawn from the Explore Deck. During the Draw Phase, “at the same time, each player independently chooses one of the available terrain types and one of the available shapes depicted on the revealed explore card. Then they draw the chosen shape on their map and fill it with the chosen terrain type. Most explore cards have one or two available terrain types and one or two available shapes to choose from.” When an Ambush Card is revealed, players draw a Monster on their neighbor’s map. When a Hero Card is revealed, players draw the Hero on their map, who has the power to kill Monsters in that Hero’s attack pattern. And during the Check Phase, players check to see if they’ve reached the end of the Season based on the time value of all the Explore cards that have been revealed.

KS Exclusives
The Collector’s Edition offered as a part of the Legendary Explorer and New Recruit Cartographer (All-In) pledge levels will not be available at retail. This version includes a custom plastic insert, 20 colored pencils, all 3 Map Packs, and the Skills Mini-Expansion 2 in addition to the items included in the Retail Version.

All-In Total: In the continental U.S., you’re looking at $90 for the New Recruit Cartographer (All-In) plus $5 in shipping for a total of $95.