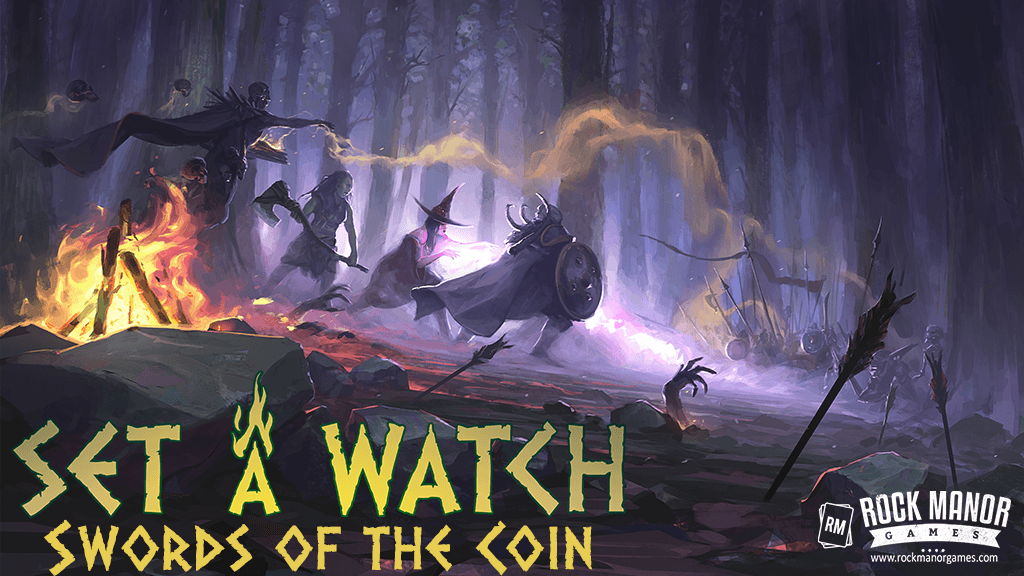 Funding Status: At the time of this posting, Set a Watch: Swords of the Coin is already fully-funded. Pledges currently total more than 8x the initial funding goal with 4 days left to go on the campaign.

What It’s About: “Both a standalone game and an expansion that can be combined with the original cooperative game. Featuring all new characters, this bunch of adventurers has to be motivated to work together. Every round you will visit all new locations and pick an adventurer to rest and get paid to take camp actions. You can use this coin to purchase powerful items from the new Merchant board and item deck. These items will assist the rest of the party on watch as they battle a line of all new creatures trying to make their way into camp. It is still a battle to keep the campfire burning.”

How It Works: “The Kingdom is in grave danger once again and there is no one left to deal with the Unhallowed threat. The crown has been forced to enlist the Swords of the Coin mercenary guild to gather champions from outside the realm. The task of hunting down the acolytes and stopping the Unhallowed scourge falls upon the shoulders of four ruthless mercenaries. While each has a unique set of skills, they must band together to vanquish this evil before the Unhallowed consume the world in darkness.”

“The game is played over a series of 9 rounds represented by 8 random Locations and 1 Final Location. Each round is composed of a Camp phase, a Merchant phase and a Watch phase; before moving to the Camp phase, all Adventurers will be asked to roll their dice.”

“Each Adventurer MUST go to Camp exactly twice during the first 8 rounds of the game. The Adventurer who rests in Camp refreshes one of their exhausted Ability cards and refreshes all of their exhausted Items, if any. Take a Rest token on an Adventurer’s first visit to Camp and place it on their board. Flip it over on their second visit. An Adventurer with all their Ability cards exhausted won’t be able to participate in a Watch phase. The Adventurer in camp does not participate in combat. Instead they assign their rolled dice and resolve the action one at a time on one of the following: 1) an action space in the Camp, 2) an action space on their Adventurer board, or 3) Rune on the back of the card on the top of the Map deck. Camp Actions include Chop Wood, Scout Ahead, Check Map, Heal, and Equip.”

“The Merchant phase gives Adventurers a chance to purchase Items that can be used on their quest. The Adventurer resting in Camp may spend coin to acquire Item cards (there is no purchase limit). When an Item is purchased, discard coins equal to the Item’s cost back to the Bank. Then, the resting Adventurer gives the Item to any Adventurer (including themselves). The Item is now equipped by the Adventurer; this will give them access to the item’s special ability. Each Adventurer can have up to 2 equipped Items. After purchasing is completed, draw Item cards to fill in any empty spots in the Market. If no Item was purchased this round, draw 1 Item and place it face-up covering another Item of your choice in the Market. Adventurers can only purchase the top-most Item of each pile in the Market. Add a coin on each Camp action space that is marked with the coin symbol that does not have a die assigned. Stack coins as necessary.”

“The Watch Phase represents a night of battling Creatures as they try and make their way into your Camp. After setting up the Line of Creatures, Adventurers spend their dice on direct attacks and Ability cards to defeat them. Players can activate abilities and assign dice in whatever order they see fit (there is no turn order) until all Creatures have been defeated or all Adventurers run out of useful actions. An Adventurer cannot participate in combat if all of their Ability cards are exhausted at the start of the Watch Phase. Combat Actions include Direct Attacks, Activating Non-Passive Ability Cards, Passive Ability Cards, and Using Items. If Adventurers run out of actions and there are still Creatures in the Line, the Adventurers, as a group, exhaust cards based on each Creature’s damage, one at the time, starting from the first undefeated Creature in the Line. Then, add those Creatures facedown to the top of the Horde in Line order. Whenever cards need to be exhausted, Adventurers must exhaust cards of their choosing from the Adventurers on Watch. The moment the Adventurers on Watch exhaust their last unexhausted Ability card, the game is lost. Once the Line is clear of Creatures, the Watch Phase ends.”

“When the final Location is revealed, the Adventurers have reached the last round, and all Adventurers go on final Watch (i.e. there’s no Camp phase this round). Proceed to setup the Line normally; then draw cards from the Horde deck and place them facedown at the end of the Line until the entire Horde deck has been added to the Line. The Horde is not shuffled. Gameplay then proceeds as normal to the Watch phase.”

KS Exclusives
Set a Watch Deluxe, the Upgrade Pack, and the Cloth Play Mat are all Kickstarter Exclusives.

Set a Watch: Swords of the Coin completes its Kickstarter on Thursday, October 15th and tentatively ships in September 2021.