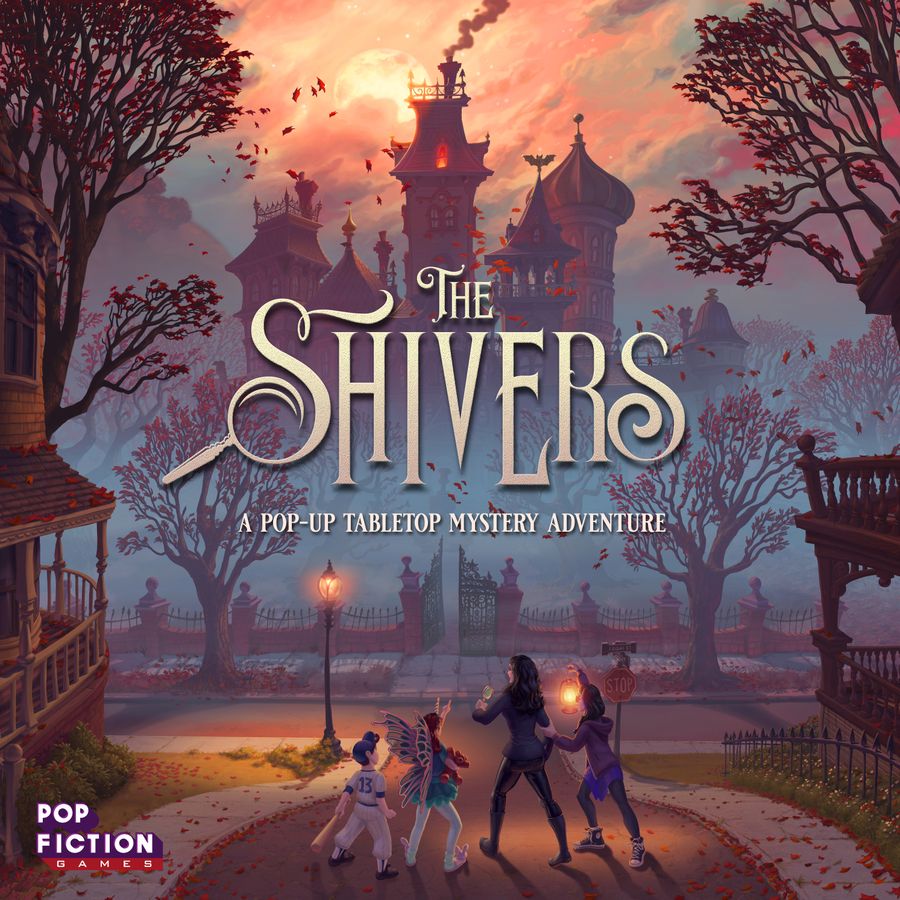 Funding Status: At the time of this posting, The Shivers is already fully-funded. Pledges currently total almost 11x the initial funding goal with 3 days left to go on the campaign!

What It’s About: “Work together in this mystery pop-up role-playing game, exploring a spooky mansion filled with hidden secrets.”

How It Works: “Each player performs one action on their turn. An example of an action would be: ‘I will open the closet door and look inside,’ or ‘I will dance with the zombie.’ An action is about 5-10 seconds of activity. Then the next player performs an action, and so on, for the duration of the episode.”

“The Storyteller runs the game, mush like a Dungeon Master or Game Master. After reading the Episode Guide, the Storyteller should also read the items in the Clue Windows on the back of each of the rooms used in this episode (there are 8 different Episode in the Core Game, and 4-6 additional Episode in the Deluxe Game). The Episode Guide is the Storyteller’s key to running the game smoothly. They will be switching between reading clues from the Guide (like the Notes & Books section), and reading clues from the Clue Windows on the back walls of rooms. The Storyteller should place the guide unfolded and upright facing them behind the Parlour Wall for easy viewing during the game.”

“Players should look at everything closely in Mirador Manor. Anything can be a clue. And many things may look like clues but could actually be dead ends. The magnifying glass may help you find some clues. Anything can be interacted with. If you pick up an object, write it on the inventory section on your character card using only the provided dry-erase marker. If you run out of room to write, you are carrying too many items. You will need to drop and erase items to make space for new items. If you hear any interesting clues by reading notes or books, you can write them on your character card as well. But you’ll probably need to erase them once you’ve moved past that clue to make room on your card. Directions in this game are given as North, South, East, and West. There is a compass rose in the Parlour to help you remember these directions. For example: ‘There is a locked door to the West.’ Pay close attention to pictures, notes, and especially anything you find hidden behind little doors. If any of the doors are difficult to open, ask the Storyteller to assist you. Please keep your character’s standee piece in the room they are supposed to be in, and move them into new rooms when The Storyteller asks you to. Only you can move your own character.”

“As the players progress through the mansion and move into other rooms, magnetically attach them and the house environment unfolds across the table as the players progress. When the Endgame part of the Episode starts, there is usually a Freak-out! If you see this word, then any players where the Freak-out occurred must retreat, and are moved to the nearest adjacent room to plan their next move. Note: certain characters can resist the urge to Freak-out. When players achieve a special accomplishment, like solving a puzzle, or defeating a creature, or some other act of bravery, insight, or generosity, the Storyteller has the discretion to award them a cookie. When the Storyteller does so, that player will circle a cookie on their Character Dashboard. Each player should start with one cookie circled. If a player asks for a hint because they are stuck, it will cost them one cookie. They should erase it off their Character Dashboard when the hint is given.”

Comparisons: I’m not aware of any other board game that has utilized this kind of pop-up art/technology. Apart from that, the Shivers is a very simple, light exploration and puzzle-solving game. Players play cooperatively, and there is no real scoring system; the game is simply about the journey. The Shivers plays a bit like Betraya at House on the Hill, but with even fewer rules and no traitor mechanic. A few other very light storytelling/adventure games include Call to Adventure, Chronicles of Crime, Deception: Murder in Hong Kong, Fog of Love, Legacy of Dragonholt, Mysterium, Mythos Tales, Tales of the Arabian Nights, Treasure Island, and When I Dream.

KS Exclusives
Kickstarter exclusives include two additional playable characters (The Family Dog and The Neighborhood Cat), including their character standees and player dashboards.

All-In Total: In the continental U.S., you’re looking at $95 for the Deluxe Game plus $15 in shipping for a total of $110. There will also be a 7.25% sales tax charged for California residents.

The Shivers completes its Kickstarter on Friday, August 7th and tentatively ships in July 2021.