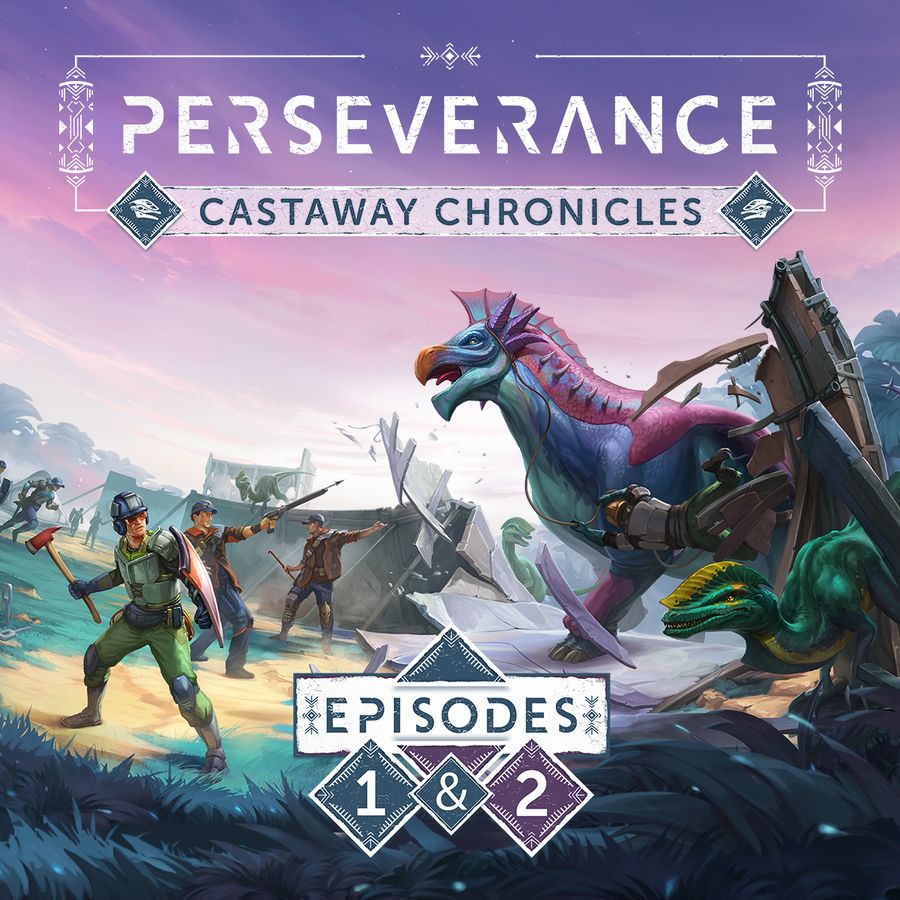 Funding Status: At the time of this posting, Perseverance: Castaway Chronicles is already fully-funded. Pledges currently total more than 7x the initial funding goal with 5 days left to go on the campaign.

What It’s About: “Perseverance: Castaway Chronicles introduces the first two episodes in a series of euro-style dice-drafting/dice-placement strategy games. The saga will ultimately consist of four episodes, telling the story of a group of survivors becoming a mighty civilization on a hostile island. As each episode features unique characteristics and a different game feel, they are playable as standalone medium/heavy games but also as a continuous campaign. The theme and story unfolds through evolving game mechanisms across the episodes, also making the rules easier to learn. In the campaign mode, the outcome of each episode influences the next, but the game has no legacy elements and no hidden rules; the whole storyline is infinitely replayable.”

How It Works:  “Perseverance: Episode 1 has two interwoven aspects of gameplay. In the Community areas, you will be organizing the daily life of the community: gathering resources, building settlements and fortifications, and partaking in early political power struggles. In the Defense areas, you will be mounting defenses to prepare for the increasingly powerful waves of Dino attacks, the menace of the island. Each aspect has its own scoring mechanism: the periodic Assembly rewards players for their influence in the Community areas, while the Dino attacks reward heroic defense against the attacking dinosaurs in the Defense areas. Among other rewards, both scoring mechanisms can give you Followers, which are required to establish yourself as a strong leader on the island and win the game.”

In Perseverence: Episode 2, players can also organize adventuring parties. “In the Discovery Zone you will be using your adventuring parties to clear the land, push back the Dinos, and occasionally mount a defense against the Dinos pushing back at you. As civilization takes hold in the wild, the Discovery Zone will matter for your political machinations as well. A few times during the game the Assembly rewards players for their influence across the Zones, while the Dino Incursion requires heroic battles defending the newly claimed land while also posing a threat. Among other rewards, both scoring mechanisms can give you Followers, which are required to establish yourself as a strong leader on the island and win the game.”

The turn order for both games is similar. In Episode 1, players start their turn by resolving Patrol cards (if any are in front of the player); in Episode 2, players instead resolve Adventure cards in the same way.

Then, in both games, the player takes a die from the pool and places it on an empty die space of that Action. They may choose any die to place, but will lose 2 Followers if they choose an opponent’s die. If possible, the die must be placed on a matching icon space within the chosen Action; if there are no matching empty die placement spaces, the player may place the die on an unrestricted empty space instead. Before they place a die, they may pay 1 Story to change its face.”

In Episode 1 only, Dinos will then be placed on the board based on die rolls.

Then, in both games, the player Resolves their Primary Action, may take a Secondary Action, and then ends their turn with a Check. In Episode 1, this Check is for a Dino Attack, and then if there are no dice in the pool, the player performs an Assembly. In Episode 2, the player has to discard down to 3 Adventure Cards if they are over the limit, Check for a Dino Incursion, and perform an Assembly if there are no dice in the pool. “The Assembly is a regular gathering of the forming powers of Perseverance to elect a community leader for the upcoming cycle. Essentially, it pays out Production resources and Followers based on Population and Presence.”

The 2 Episodes have different Primary and Secondary Actions, so for the purpose of this rules summary, only the Actions from Episode 1 are listed. Primary Actions in Episode 1 include: Rations, gaining 2 Food; Patrol, using Soldiers to fend off wandering Dinos; visiting the Pub to obtain Stories; the Military action where players recruit various types of Soldiers; Politics, where players can permanently sway some of Perseverance’s best specialists, converting neutral dice in the pool to their player color; Social Aid, to gain 1 Modern Resource and 1 Food; Settle, to place Settlements; visiting the Protection Zone, where players salvage parts of the wrecked Pearl of the Seas to build the settlement, gaining 2 Modern Resources; and Fortifications, placing Walls and Traps.

“At the end of the game, each player may gain Followers in several ways: Tally the players’ Contribution (i.e. the number of player colored pieces) across all Defense areas. Each player scores Followers based on their place in the Contribution order: 2p 6/0, 3p 8/3/0, 4p 11/6/3/0. In case of a tie, add up the Followers the tied players’ positions would gain and divide it evenly, rounding down, amongst them. A player with zero Contribution scores no Followers. Each player gains 1 Follower for each Food, Modern Resource, Story and Soldier remaining on the Main board and on their player board. Each player gains 2 Followers for each pair of 1 Safeguard and 1 Valor. The player with the most Followers wins. If multiple players tie, the winner is the player with the most total Soldiers (on the main board and on their player board). Any still-tied players share a win.”

Comparisons: What makes Perseverance: Castaway Chronicles unique is that the games are heavy-ish Euros AND campaign games with a story. Often times campaign games are either narrative & story-telling focused, with the main mechanics centered around making narrative choices. Sometimes, in games like Mansions of Madness, gameplay expands to include basic movement, some resource management, and cooperative strategy revolving around puzzle-solving or combat. But usually these types of games don’t also include deep mechanics or Euro-style gameplay. I suppose the idea is that having a game with complex mechanics AND a narrative campaign presents too many barriers to entry for many players. Charterstone, a legacy game from Stonemaier, has Euro-style mechanics, but it’s still on the medium side of the spectrum, and the campaign story included in Charterstone is rather negligible. Seafall is perhaps more involved, but Seafall is also a game that many found difficult to love for various reasons. Perhaps the best examples, then, are Gloomhaven, Tainted Grail: The Fall of Avalon, and Maracaibo’s quest/campaign mode.

KS Exclusives
The Deluxe Edition will not be available at retail, and because of the size and scope of the project, even the Standard edition will have a very limited retail presence via those retailers in direct contact with Mindclash. The Standard Edition will, however, be available through Amazon.

All-In Total: In the continental U.S., you’re looking at $135 for the Perseverance Deluxe Edition plus $25 in shipping for a total of $160.