Kickstart This! #234: Merchants of the Dark Road 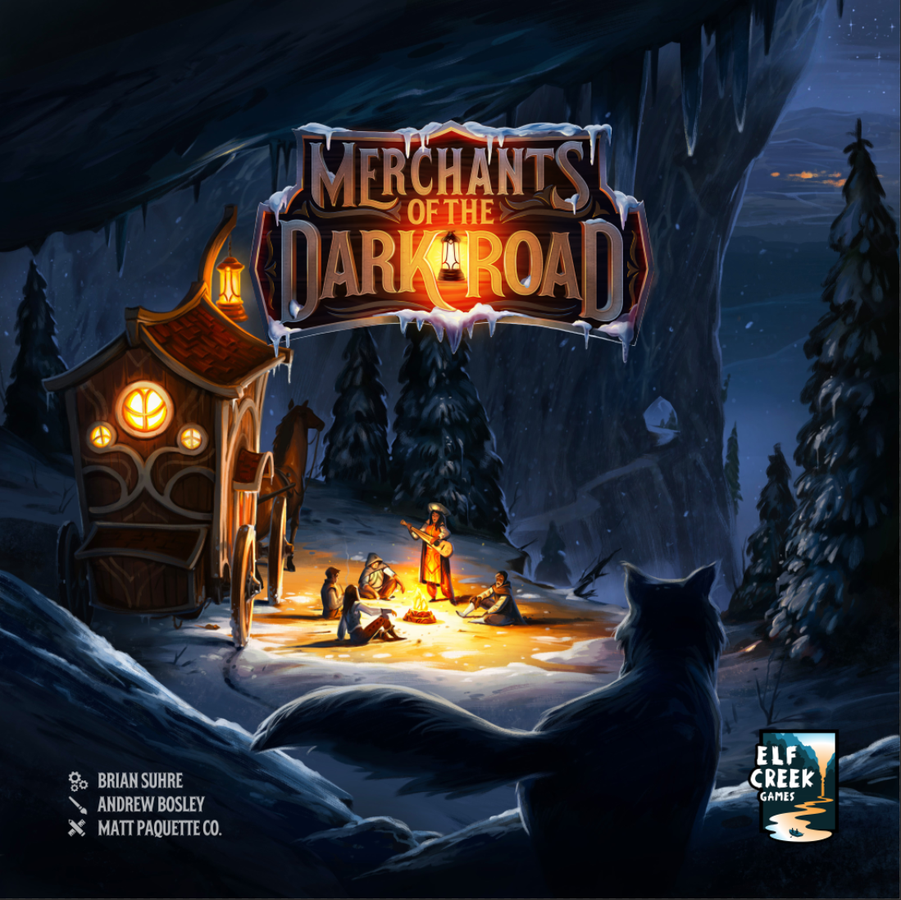 Funding Status: At the time of this posting, Merchants of the Dark Road is already fully-funded. Pledges currently total more than 9x the initial funding goal with 3 days to go on the campaign!

What It’s About: “In Merchants of the Dark Road, you are one of these brave few merchants that travel the dangerous paths between cities. Discover the capital city where most of your actions will take place using a rondel action system. Collect and produce items to add to your caravan, or sell these items to local heroes and hire them to travel with you. Manipulate the market price of items, visit the back alley sellers, or delve a nearby dungeon for magical items to gain the potential for even more coin and notoriety. Gather lanterns to ease your passage along the dark roads as you guide your caravan to distant villages. Deliver goods and heroes to the best destinations and gain fame for your bravery. Balance the money you earn with the height of your fame because your final score after a number of game rounds will reflect the lowest of these two values.”

How It Works:  “A round proceeds in clockwise order. Each player will take a full turn, going through each of the turn steps, before passing their turn to the next player. Rounds continue until the end of the game is triggered. A player’s turn consists of 4 steps that must nbe taken in the following order:”

“Plan: In this step, a player chooses 1 night die in their main reserve to bump a locked night die into the action pool.”

“Move: The player moves their wagon around the central board a number of spaces equal to the value of one die in their action pool. When placing a night die in a district, the active player immediately performs the district’s action.”

“Act: After moving, the player will take actions on the central board using dice from their action pool.”

“Rest: This is the cleanup step, where a player refreshes the central board, checks if their main reserve is empty, and passes play to the next player.”

During the Act step, the active player will take their action from among these districts. At the Great Bazaar, the player rotates the market wheel one space clockwise, flips one market die to any good they want and place it back on its matching section, and then choose the market dice they want to purchase and remove them from the wheel, paying the coins to the supply while taking the matching goods. At the Queen’s Commissions, the player places a die to collect a commission. At the Dark Market, the player purchases goods, commissions, and crown cards (objectives). At the Inn, the player sells good to various heroes for coins. At Yung’s Excursions, the player can either find upgraded goods in the ruins, or travel to outlying cities to fulfill commissions for prestige and other rewards. And finally, when Traveling, the player chooses a companion card, announce the city they’ve chosen to travel to, and then either choose to take the “dark road,” or pay 3 Lanterns to the supply to take a shortcut. Other players may jump on the travel action and join the active player, and then all involved players will roll a die and compare it to the road value to determine it they incur penalties.

“The end of the game is triggered when all players have played their last locked night die. Then, each player may travel to any one city of their choosing and deliver commissions and heroes to the chosen city, skipping roads, travel dice or following. Players score coins and prestige from completed crown cards. The lower value becomes their base score and converted to VP. Unused illuminated dice are worth 1 VP each, and then the player with the highest total score wins, with ties broken by the highest value of coins/prestige (the figure not initially used when selecting the lower number to become VP), then by the player who delivered the most contracts, and then by the player who delivered the most heroes.

Comparisons: Coloma, Merchants Cove, Raiders of the North Sea, Rise to Nobility, and Village for starters. But if you’re specifically looking for games that utilize work placement with dice workers, some popular favorites in the sub-genre include Bora Bora, The Castles of Burgundy, Coimbra, Kingsburg, Lorenzo il Magnifico, Madeira, Pulsar 2849, Rajas of the Ganges, Teotihuacan: City of Gods, Troyes, and The Voyages of Marco Polo.

KS Exclusives
It’s currently unclear if there are any KS Exclusives, but it’s entirely possible that only the Standard Edition will be headed to retail.

Merchants of the Dark Road completes its Kickstarter on Friday, June 26th and tentatively ships in January 2021.