Kickstart This! #232: The Whatnot Cabinet 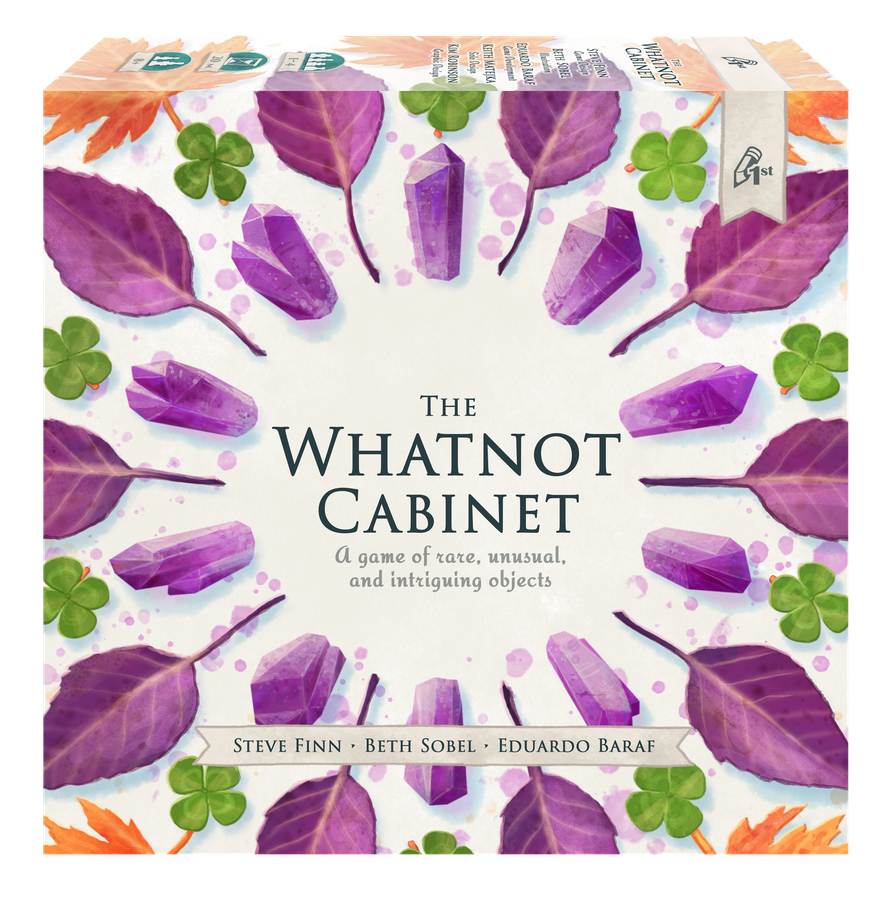 Funding Status: At the time of this posting, The Whatnot Cabinet is already fully-funded. Pledges currently total more than 2x the initial funding goal with 5 days left to go on the campaign.

What It’s About: “Everyone enjoys discovering small, precious objects along beaches, trails, and in the wilderness, but a special few have the knack for assembling them into a true collection. Leave your house, uncover unusual objects, and create your wonderful collection of curiosities.”

How It Works:  The Whatnot Cabinet is a fairly simple tile selection and set collection game played over 6 rounds in a 3-4 player game, and 3 rounds in a 2-player game.

At the start of the game, 5 of the 8 Curiosity Cards are placed out; whoever fulfills each Card’s requirements first over the course of the game claims the associated tile for end game-scoring. Players also place out 1 of the game’s 5 Wonder Cards; each tile in a player’s collection matching the depicted item will earn the player 1 additional point at the end of the game.

Then, each round, players reveal 4 Curio Tiles to make up the tile market known as “The Outdoors.” Players take their turn in turn order, choosing an action that allows them to draw some combination of tiles from the bag or choose them from the market, before finally placing their 2 selected tiles in their “Whatnot Cabinet.” Choosing a more powerful action with more options will put the player later in the turn order for the subsequent round.

At the end of 6 rounds (or 3 in a 2-player game), players add up their scoring tokens for columns and rows, along with any Curiosity Cards they collected over the course of the game, a point per Special Tile, 1 points for each tile object matching the one on the Wonder Card, 1 point for every Crown icon on their Tiles, and points for finishing in one of the first 3 spaces on the turn order track. The player with the most total points wins, with ties broken by the player with the most Blank Tokens, and then by the player who finished highest on the turn order track.

Comparisons:  The Azul games, particularly the first one, are prime examples of simple games where players score points for collecting and ordering tiles in a specific way on their player boards. Barenpark and Quadropolis are two more lighter tile placement & set collection games. Artist Beth Sobel has also worked on Arboretum, Between Two Cities, and Lanterns, three more light tile-placement games. And Kingdomino and Patchwork are yet two more lighter tile placement games.

The Whatnot Cabinet completes its Kickstarter on Monday, June 22nd and tentatively ships in May 2021.