Kickstart This! #24: Era of Tribes 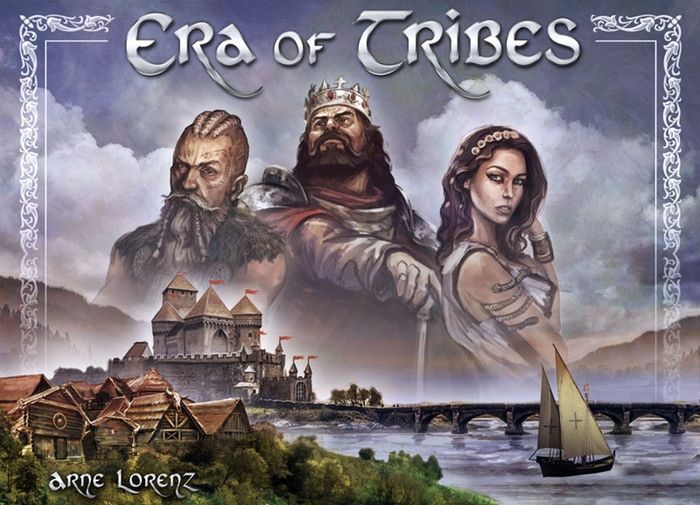 Funding Status: At the time of this posting, Era of Tribes is already fully-funded.  In fact, pledges currently total more than 4x the initial funding goal.

What It’s About: A civilization, worker placement, and strategy game set in Europe from the Neolithic period to the High Middle Ages.

How It Works: Each phase players will Adjust Morale, Adjust Turn Order, Take Actions, Trigger Autoexpansion, Clean Up, and End Round. During the Actions Phase, players will be able to choose from Placing Vassals, Moving Vassals and Fleets, Found Cities, Fighting Battles, Trading, Collecting Taxes, Triggering Diplomacy, Creative Improvements (including Farming, Culture, Navigation, Commerce, Mechanics, and Architecture), using Bread & Circuses to increase Morale, and Starting a Revolution. End game is triggered when any player meets any 1 of the 6 end game conditions: have 15 improvements, have 25 land provinces, reach Ancient Times, conquer all home provinces of one other player, the victory point marker and IP marker of a player meet on the track, or 1 player accumulates 28 IP (or 2 players both accumulate 25 IP, 3 players all accumulate 22 IP, or 4 players all accumulate 20 IP). These end-game conditions are all extended for the long version of the game. Points are then scored for each player Personal Influence Card, the Face-Up Influence Cards, Morale, and points for Red Barbarian Hamlets.

Comparisons: The obvious comparison here is Through the Ages. Some other games that include civilization with worker placement are Age of Empires III: Age of Discovery, The Manhattan Project: Energy Empire, and The Colonists. Some games that have successfully 4x with worker placement include Dominant Species, Empires: Age of Discovery, and Heroes of Land, Air, and Sea.

Add-Ons:
None listed. But the FAQ states that the metal coins will be available as an add-on in the Pledge Manager.

All-In Total: In the continental U.S., you’re looking at $98 for the Emperor’s Edition. Shipping has only been estimated for the core game at $15. If we assume another $10 for the 5 & 6 player expansion and the 30 modular board tiles (which could be heavy), that would provide a total estimate of $123.

Era of Tribes completes its Kickstarter on Monday, June 3rd and tentatively ships in October 2019.