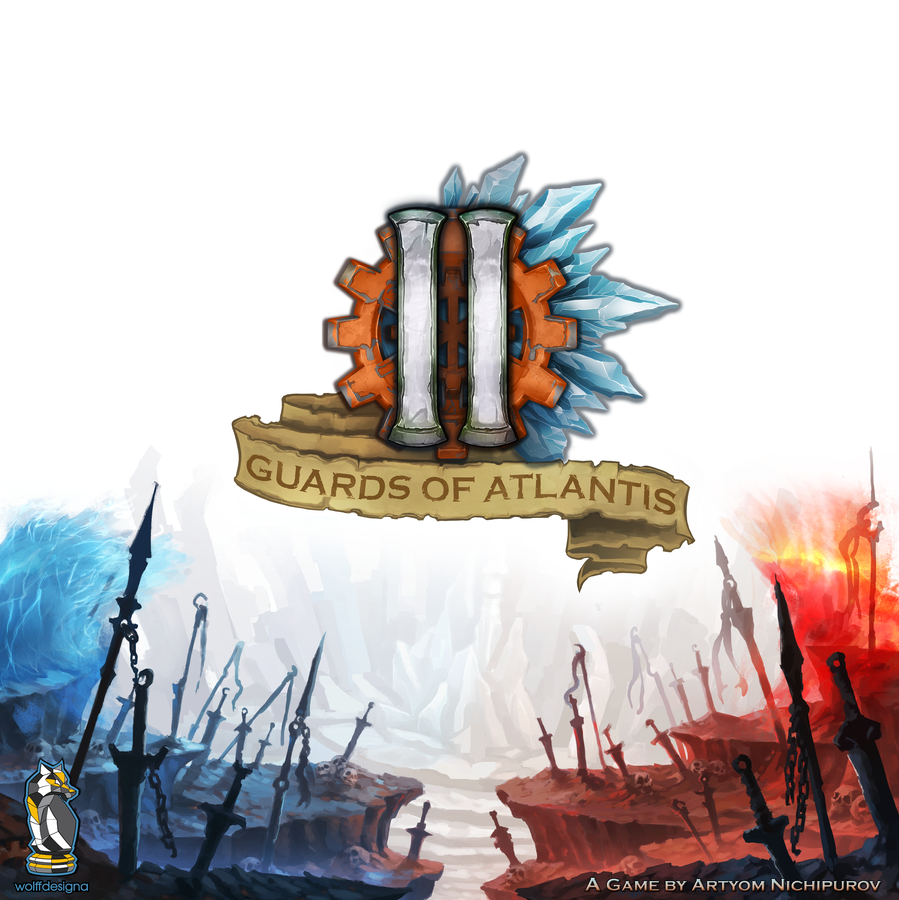 Funding Status:  At the time of this posting, Guards of Atlantis II: Tabletop MOBA is already fully-funded. Pledges currently total more than 4x the initial funding goal with 2 days left to go on the campaign.

What It’s About:  “A competitive ‘zero-luck’ team-based board game inspired by computer games of the MOBA genre,” and “a complete overhaul of the original game with 21 new heroes, new game board and much more, streamlining the rules of the original, making it faster and tighter.”

How It Works:  Gameplay is split into rounds, with each round consisting of 4 turns. On each turn, all players play a card simultaneously, then resolve the cards in initiative order. Cards contain the following primary actions: Movement, Skill, Attack, Defense, and Defense or Skill; players may instead choose to perform a Hold action (resolving a turn by doing nothing) or using either of the Movement and Defense Secondary actions if they also appear on the player’s card. Once the player has completed their action, they place the card face-up on the current turn slot of their Hero dashboard.

When Attacking, the player calculates their Attack Value based on the Attack Value of their card and a bonus Attack for every item used. The enemy Hero has a chance to play a Defend card. When a Hero is defeated, it is removed from the board, along with respawn tokens equal to that Hero’s lowest card tier. “If the last token is removed, the games ends and the team with no respawn tokens left loses the game.”

There are 2 other paths to victory in Guards of Atlantis II. “A Lane is a sequence of Zones, connecting the two Thrones. At the start of the game all Minions are placed in the Zone in the middle of the Lane. That zone is called the Battle Zone.  If all the opposing minions are destroyed, your Minions advance one zone closer to the enemy Throne and that Zone becomes the new Battle Zone. Defeated minions respawn in the new Battle Zone and the fight continues – this is called ‘Pushing the Lane’. Should your Minions ever Push the Lane into the enemy Throne, they capture it and your team wins the game.”

Finally, whenever a team Pushes the Lane, a Wave counter is returned to the box. When the last one is gone the game ends, and whichever team won that last Push wins the game.

Comparisons:  The easiest comparison is this game’s predecessor, Guards of Atlantis: Tabletop MOBA. That game currently has a 7.3 rating on BoardGame Geek, a respectable number that the sequel hopes to improve upon with rules tweaks and streamlining. Perhaps the best MOBA-themed board game out there is Cloudspire (at least it’s the highest rated), from Chip Theory Games, the design team and publisher behind Too Many Bones. Rum and Bones and its sequel game, Rum and Bones: Second Tide is also fairly popular. And while not really a MOBA-themed game at heart, the very popular movement programming game Mechs. vs. Minions is set in the League of Legends universe.

Guards of Atlantis II: Tabletop MOBA completes its Kickstarter on Thursday, May 21st and tentatively ships in May 2021.