Kickstart This! #201: Trekking the World 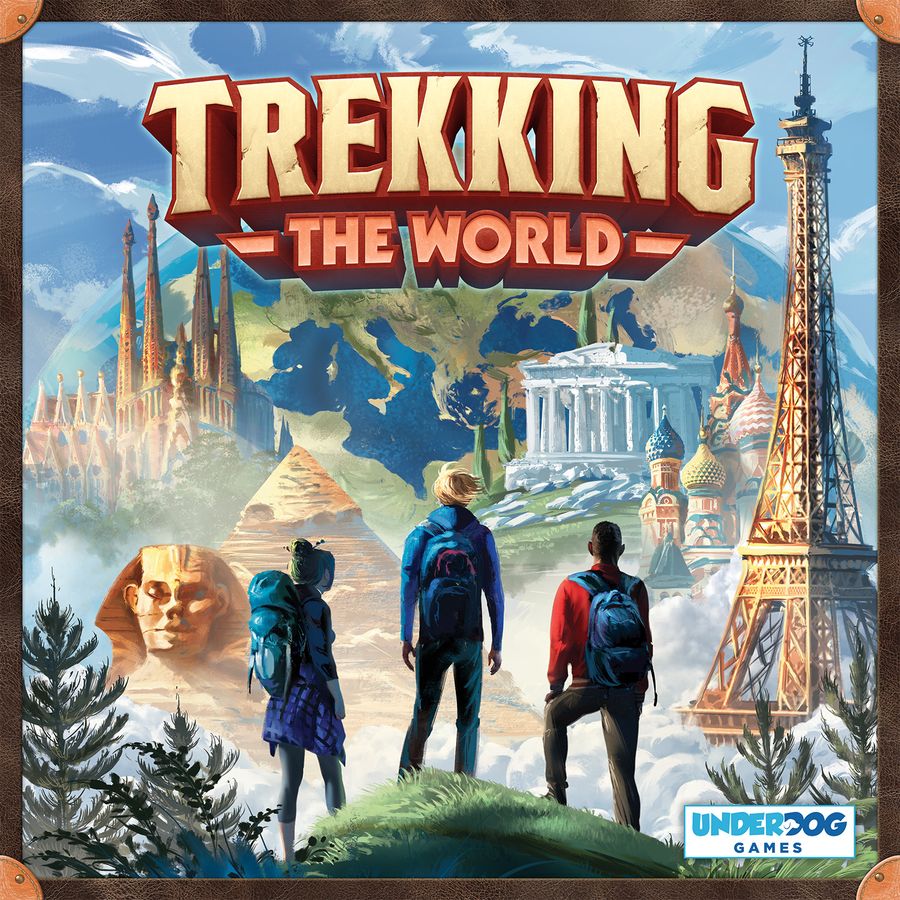 Funding Status:  At the time of this posting, Trekking the World is already fully-funded. Pledges currently total almost 4x the initial funding goal, with just less than 7 days to go on the campaign.

What It’s About:  “Players compete to be the ultimate globe trotter by racing to visit real-world and world-renowned locations, and collecting rare souvenirs along the way.”

How It Works:  “Beginning with the first player and proceeding clockwise around the table, each player takes a turn, one at a time until the game ends. Each turn has two phases that must be completed in order: 1) Move, discarding at least one Trek card to move to another location, and 2) Choose to a) Draw Two Cards, b) Take a Tour, or c) Journey.”

There are six Airport locations on the map. Players begin the game there and may also visit them during the game. If they begin their turn occupying one of these Airport locations, then during the Move action they are eligible to take the special action Fly– picking up their Trekker and placing it on any other unoccupied Airport location. This Fly action may only happen at the beginning of a turn, before other actions are taken.”

“If able, players MUST move their Trekker to another location on every turn. If they have no Trek cards or are blocked from moving anywhere, skip this phase.” Players are blocked by other players’ Trekkers or Airport locations, none of which are they allowed to pass through. To Move, players announce a location to move to, then reveal one or more Trek cards from their hand with a total value that EXACTLY matches the number of connections separating them from their ending location. If a player ends their moment on a space with a Souvenir cube, they collect that cube and add it to their Souvenir briefcase. “If a player has the most Souvenirs of a given type (and at least 2), they’ll also collect the Most Souvenirs card for that souvenir type and place it in front of them. If a player collects the last Souvenir from one of the map’s six separate colored regions, they’ll also claim that Region Bonus Token, taking the Region Bonus Token and placing it face down near their suitcase.”

“When Drawing Two Trek cards, the active player may choose from among the face up Trek cards, or may draw from the top of the Trek card deck. If they draw a face up card, immediately refill its empty spot by taking the top card of the Trek card deck and placing it face up in the empty spot. There should always be four face up Trek cards to choose from. If the deck is ever depleted, re-shuffle all the discarded cards and refresh the deck. There is no hand size limit.”

“When Journeying, the active player activates one of the available Journey cards, revealing two Trek cards from their hand with matching icons. The number values of these Trek cards do not matter. Then the player discards these cards and performs the actions described on one of the Journey cards, which include: Moving X number of spots, Moving to any Airport, Drawing X cards from the deck, Taking a Tour for X less, Gaining a 3 VP Token, or Reserving a specific Destination.”

“The end of the game is triggered when either 5 of the 6 Region Bonus Tokens are claimed, or when a player collects their fifth Destination card. When either one of these two things happen, the player who triggered the end finishes their turn, and the game immediately ends.”

Comparisons:  Parks. Trekking the World is very similar to Keymaster Games’ Parks. And both games have much in common with Tokaido. In fact, it may be the unbridled success of Parks that killed some of the potential audience for Underdog’s previous version of Trekking the World, titled Trekking the National Parks. But with a re-theme and some slight revisions, Trekking the World can stand on its own a bit more, featuring a board reminiscent of Pandemic (without the unforgiving, plague-themed gameplay) and a scope that has opened up to include locations from around the globe.

KS Exclusives
The included Card/Promo Pack is a Kickstarter exclusive.

All-In Total: In the continental U.S., you’re looking at $40 for Trekking the World + Exclusive Card Pack plus $14 in shipping for a total of $54.

Trekking the World completes its Kickstarter on Tuesday, April 7th and tentatively ships in September 2020.