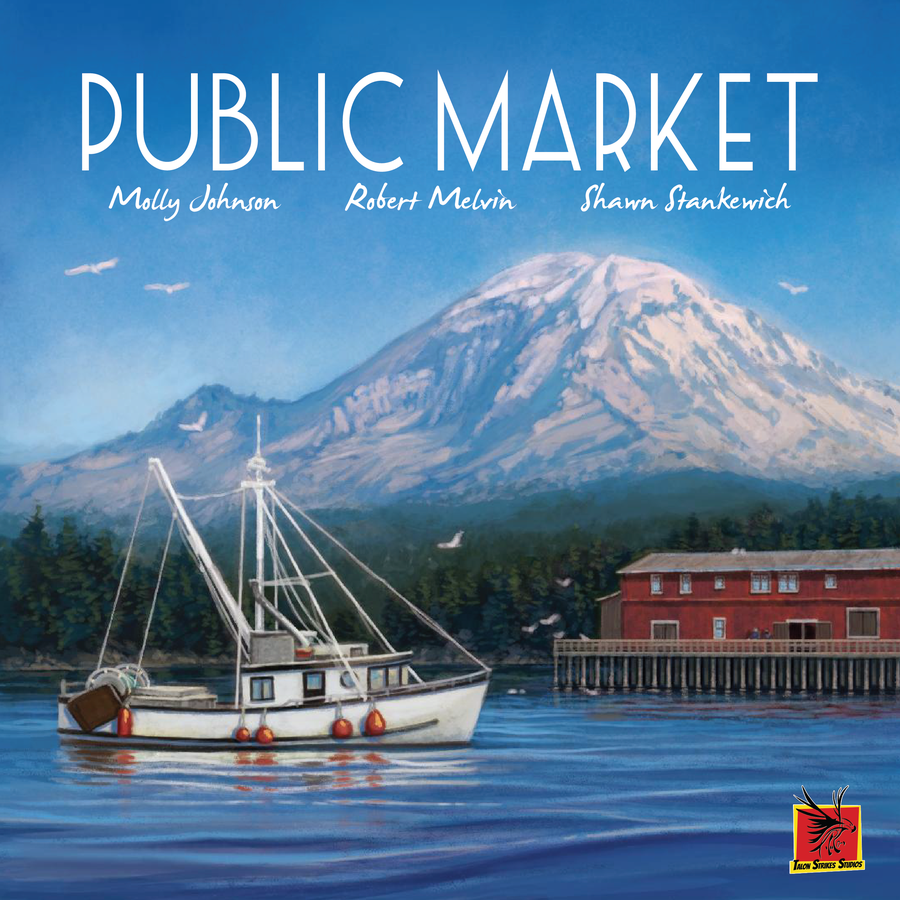 Funding Status:  At the time of this posting, Public Market is already fully-funded. Pledges currently total more than 3x the initial funding goal, with less than 24 hours to go on the campaign.

What It’s About:  “Public Market is a tile drafting and tile-laying game set in the Pacific Northwest. Players will venture out on to the open waters of the Pacific, haul in fresh fish (represented as polyominoes), and carefully pack the fish into an ice chest (ideally around the crabs and ice cubes already present). Once the player feels comfortable with the amount of fish in their ice chest, they head to the market to fulfill contracts to outsell their competition and build their reputation up with the local canneries.”

How It Works:  “Competing against other players, you will strive to fulfill contracts for large commercial, public companies, and small restaurants in the region. With Mt. Rainier towering over you in the serene waters, you will catch sustainable fish such as sardines, herring, cod, and salmon. Place the fish you hook into your ice chest on the boat. When your ice chest is full, you will head to the market and sell fish towards the current list of contracts and empty your ice chest. Taking your earnings and a fresh new ice chest you will bid against other players for fishing order and again head out to sea.  Players will play over several rounds until the end is triggered when the Ocean Bag of fish tiles is empty. Each round of play will have several phases resolved in the following order: Bidding, Action, Repopulate, and Navigation.”

During the Bidding Phase, players bid in the turn order established in the previous round. At the start of the game, bidding begins with the first player and continues clockwise. There are 5 bidding locations players may choose to go to– No Scrap at $0, Sardine Scrap at $2, Herring Scrap at $4, Cod Scrap at $6, and Salmon Scrap at $8. “Once the player places the meeple on the location of their choosing, they will pay the amount of money associated with the location they choose and take the associated scrap of fish (if available).” If there is already one or more workers at the location, they must pay an additional $1 (to the other player) if they choose to place to the right of that player, essentially cutting in line. Turn order will later begin with the right-most player and then move to the left. If a player cuts in front of multiple workers, they still only have to play $1 to the right-most of the workers they’re cutting in front of– they do not have to pay $1 for every worker they’re displacing. Players may not pay $1 to cut in front of anyone in the $0 location.

“Once bidding is completed, in turn order starting with the highest bidder, players will either go Fishing or go to Market. If they go Fishing, they’ll take the lowest number at the bottom of the Market board on the ‘DOCK’ side of the market board, numbered 1-4. If they go to Market, they’ll take the lowest number on the ‘MARKET’ side of the board, numbered 5-8.” This is the Action Phase of the game. If the player goes to the Dock side, they’ll immediately take a fish from the column under the Boat (unless they also have a Shrimp Bonus, which allows them to take a fish from anywhere in the Ocean). They must immediately place the fish (and the fish scrap from bidding, if they obtained one), into their Ice Chest. Each Ice Chest contains 2 Ice Blocks, 3 Shrimps, and 1 Crab. A player may never cover the Ice Blocks. If they cover all 3 Shrimp in an Ice Chest, they’ll receive a Shrimp Bonus. (Shrimp Bonuses may be used for any 1 of 4 one-time bonus abilities, which must be chosen upon receiving the bonus. One is the ability to fish anywhere in the Ocean as described above; another is to “save” a fish tile into a personal cooler off the Ice Chest when selecting it; a third is to take a fish scrap from anywhere on the Market board at any time on the player’s turn and immediately add it to their Ice Chest; and the final ability is to take $5 from the Bank at any time on the player’s turn). If they surround the Crab on all 8 surrounding squares, that Crab will qualify for the Crab Bonus in when selling at the Market. Fish Tiles may also be sold to the Boat Captain for $3 if they don’t fit into the player’s Ice Chest. Additionally, players will immediately adjust their Fish Tracker whenever they place a fish in their Ice Chest to denote the number of each Fish inside.

When going to Market, players will score the Crab Bonus if applicable, and adjust their Catch Tracker as they fulfill Public Contracts and sell fish. When players use fish to fulfill Public Contracts, they’ll also be able to choose whether to receive a Scoring Location with VPs or a Collection Location with an associated Cannery Logo for use during End Game Scoring. Players’ fulfilling the Red Todays’ Catch will also earn Cannery Logos, and players fulfilling the Blue Todays’ Catch will earn Cannery Logos and Gears. Gears allow players to permanently increase a fish column on their Fish Tracker by one level, as if they always have a fish of that type in their Ice Chest. After fulfilling Contracts and Today’s Catches, players must sell any remaining fish from their Ice Chests, and do so at the rates printed on the bottom of their Fish Tracker. Players will then draw a new Ice Chest.

During Repopulation, any spaces in the Ocean are replaced with Fish Tiles from the draw bag. If the bag runs out during or by the end of Repopulation, end game is triggered and the players will continue to play for 4 more round.During Navigation, the last player in player order gets to place the Ship in the Ocean Column of their choice.

Once players have played the remaining 4 rounds after the Ocean Bag is emptied, they’ll proceed to End Game Scoring. Players will gain points for the numbers printed on the various Scoring Locations where they’ve sold fish throughout the game; 1VP for every $3 remaining in their inventory; for their various Cannery Logos, 1/3/6/10 VPS for every 1/2/3/4 Logos of the same kind; and 1/3/5/7/9/12 VPs for 1-6 Crab Bonuses. The player with the most points wins the game.

Comparisons:  There have been a ton of good polyomino games in recent years, from A Feast for Odin and Patchwork to the Uwe Rosenberg trilogy of Cottage Garden, Indian Summer, and Spring Meadow; there’s also Barenpark, Santa Maria, and my personal favorite, The Isle of Cats.

All-In Total: Disregarding the Limited Nautical Edition with all of its expensive bells and whistles, in the continental U.S., you’re looking at $65 for the Public Market Bundle plus $10 in shipping for a total of $75.