Kickstart This! #190: Viscounts of the West Kingdom + Tomesaga 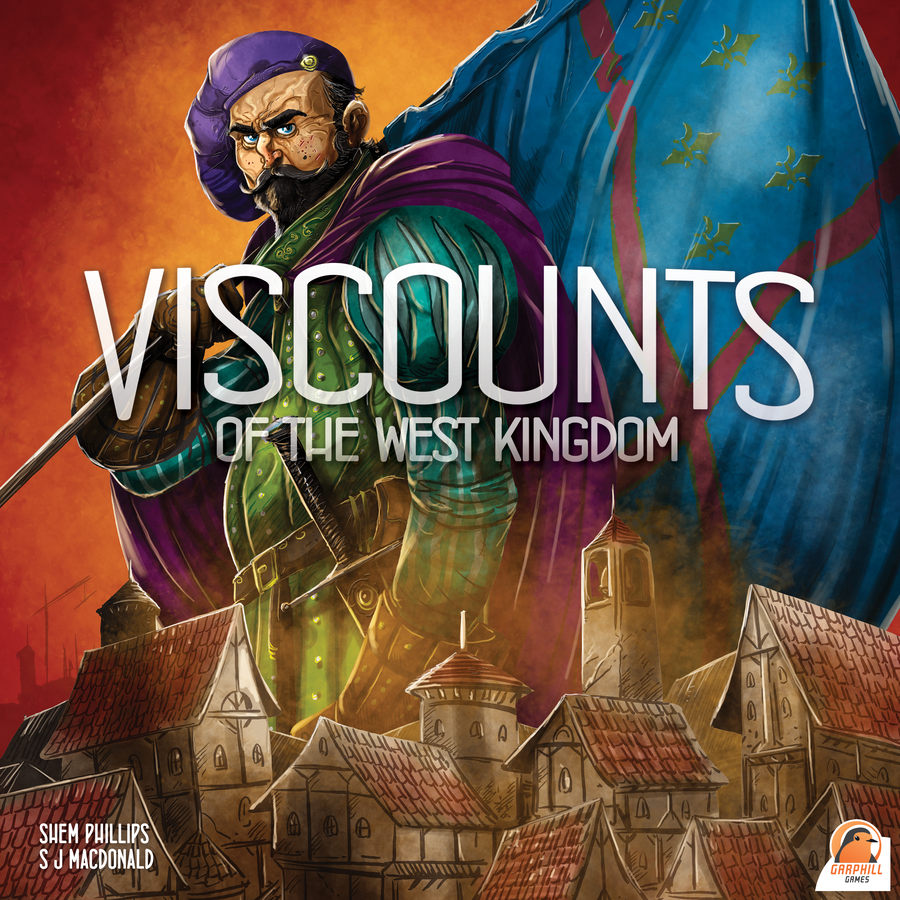 Funding Status:  At the time of this posting, Viscounts of the West Kingdom + Tomesaga is already fully-funded. Pledges currently total more than 44x the initial funding goal, with 4 days left to go on the campaign!

What It’s About:  “Increase your influence across the kingdom in this unique deckbuilding-powered rondel strategy game.”

How It Works:   “Viscounts of the West Kingdom is played over an undetermined series of Rounds. Each Round consists of each player taking 1 turn (beginning with the player with the Start Player Marker), followed by the player on their left (clockwise around the table), and so on. All Victory Points will be calculated at the game’s end. Players will be moving through a number of phases on each turn, with the main objective being to move their Viscount clockwise around the Main Board to take 1 of 4 primary actions and potentially hire new Townsfolk. The phases that players take each turn are laid out from left-to-right across their Player Boards: Card Management, Movement, Primary Action, Recruit, Resolve Collision, and Draw Cards.”

“During the Card Management Phase, players will be managing a shifting line of Townsfolk Cards on their Player Boards. These cards will provide players with Icons, useful for taking the 4 primary actions.” In general, players will move all of their cards one space to the right on their player boards, and any card that “drops off” the end will go into a discard pile. They’ll also place a new card on the left-most spot of their player boards. This is the deck-building like mechanic of the game that rotates cards and their active abilities for the player.

During the Movement Phase, the player will move their Viscount around the central Rondel a number of spaces equal to the Silver value of the card they just played into their player board during the Card Management Phase.

Without going into too many details, the Primary Action Phase then has the player choosing 1 of the 4 main primary actions: Trading, Constructing a Building, Placing Workers, and Transcribing a Manuscript. They’ll use “a combination of Icons on their Player Boards (excluding discard piles), spending resources, or using Icons on a dismissed Townsfolk, to help fund their chosen action.”

During the Recruiting Phase, the active player can then hire the Townsfolk card where their Viscount ended its movement by paying the indicated Silver value.

In the Resolve Collision Phase, players resolve the Virtue and Collision markers on their player board. This can gain them Virtue, activate abilities on their active Townsfolk Cards, gain them items, and gain the opposing players items as well.

In the Draw Cards Phase, players will draw up to their hand limit, which begins the game at 3. This will give them several choices for the Card Management Phase when they begin their next turn.

“The end of the game is triggered once either the Poverty Card or Prosperity Card is revealed. At this point, the current Round is finished, then 1 final Round takes place, so that all players have had the same number of turns. In other words, the player sitting to the right of the player holding the Start Player Marker will always have the last turn. Note that it is possible for both Poverty and Prosperity Cards to be revealed. This is called the Divided Kingdom, meaning that both cards will be active during final scoring.”

During End Game Scoring, players will receive points for the following: Constructed Buildings, as printed across the tops of Player Boards; VPs for each Worker in the Castle, equal to the tier in the Castle; for sets of Transcribed Manuscripts; for the Castle Leader Card and Cleric Bonus Cards; -2 VP for each unpaid Debt; 1 VP for each Acquired Deed; 3 VP for each Approved Deed; if the Poverty Card has been revealed, 12/8/4 VPs for the players with the most, second-most, and third-most flipped Deeds; and if the Prosperity Card has been revealed, VPs in identical amounts but for flipped Debts (instead of flipped Deeds).

Comparisons: The best general comparisons are the other “of the North Sea” and “of the West Kingdom” games: Explorers of the North Sea, Raiders of the North Sea, Shipwrights of the North Sea, Architects of the West Kingdom, and Paladins of the West Kingdom. They’re all designed or co-designed by Shem Phillips, all published by Garphill Games, all have similar iconography, and all have art by Mihajlo “The Mico” Dimitrievski. And they’re all at least very good games, although their mechanics do differ from game to game. Architects, Paladins, and Raiders are the most complex of the three, take up the most table space, and all feature worker placement as a primary mechanic while incorporating other, difference in gameplay. Explorers and Shipwrights are the odd games out; Explorers features tile placement and pick-up & deliver, and Shipwrights card selection and card drafting. Viscounts is the first of the bunch to feature deck-building as a primary mechanic, although it’s combination of card-play and worker placement can make it feel like Shipwrights brought to a much more complex level and paired with combinations and evolutions of the worker placement mechanics in Raiders, Architects and Paladins. Some other great deck builders out there include Aeon’s End, Dominion, Hero Realms/StarRealms, the Legendary series (including Legendary: A Marvel Deck Building Game), and Thunderstone Quest.

All-In Total: In the continental U.S., you’re looking at $180 for the King Pledge.

Viscounts of the West Kingdom + Tomesagsa completes its Kickstarter on Thursday, March 19th and tentatively ships in December 2020.