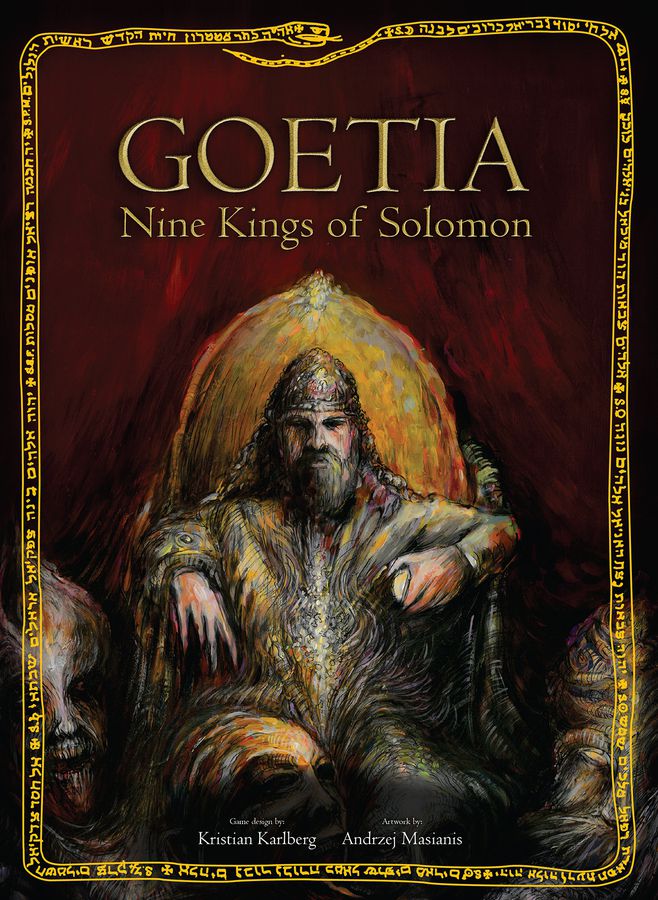 Funding Status:  At the time of this posting, Goetia: Nine Kings of Solomon is already fully-funded. Pledges currently total more than the initial funding goal, with 5 days left to go on the campaign.

What It’s About:  “A worker placement & resource management game where players try to contact, conjure and worship goetic demons.”

How It Works:  At the beginning of the game, “starting with the player with the starting player marker, players take turns taking one of their Followers from the Worlds Edge, and placing that Follower in his private play area. Players continue to do this until all players have 3 Followers each. If a Worlds Edge card would become depleted of followers; flip that Worlds Edge card. Players start the game with only these three Followers each. They have no cubes or Attention.”

Gameplay proceeds in rounds. Each round, players Use Demonic Powers or Treasures, activating card abilities that can be triggered at the beginning of a round. Then, in player order, players take turns in clockwise order. Each turn, players play one Follower from their hand to an active hex-space. Each Hex-space may only contain one Follower. When a Follower is placed on a Hex-space, the player is immediately rewarded with whatever is depicted inside the Hex-space. Examples include taking 1 pink cube from the supply, taking 1 black cube from the supply, taking any 2 cubes of the same color from the supply, choosing any 1 Pact Card, taking 1 Attention from the supply, and getting a Following from the associated World’s Edge. When all players have no more Followers to play, the round ends, and the following events occur in order: if Demons have been conjured and Followers are worshipping Demons, the player will get cards from the Worshipping Demons; if Followers are standing on the Scry Board, they’ll get Attention for Contacting Demons; if a Scry Board has run out of Attention, Demons are Conjured; then the players will Draw New World Cards; Retrieve Followers; Check if the End Game Condition is met, and if not, pass the Starting Player Token clockwise.

The main tableau area of the game, a 3×3 grid of World Cards, as well as the face-up World Card from the World Card draw deck, are locations where players can always place their Followers for free, taking the depicted resources or actions. The World’s Edge, or the nine cards surrounding 3 sides of the 3×3 grid, are used to recruit more Followers, and later in the game, to obtain valuable Resources or Pacts Cards from flipped World’s Edge cards. Scry Boards are used to gain Attention (coins), and are the only places to gain Attention early in the game, at the cost of one colored cube. At Dark Boards, players can trade the depicted Resources to acquire Pact Cards or gain valuable Resources. At the Worship Demons area, players can trade the depicted Resources on the associated Dark Board to acquire cards, like Demonic Powers, Relics, and Treasures. Finally, each player’s Private Play Area is where they keep their in-hand Followers, Resources, and tableau of cards.

Comparisons:  Dark Domains is another worker placement game with a demonic theme. Eschaton has a similar theme, but is a deck-building and area majority game similar in mechanics and gameplay to Tyrants of the Underdark. Other lighter worker placement games include the likes of Coal Baron, Century: A New World, Dice Hospital, Ex Libris, The Godfather: Corleone’s Empire, Kingsburg, Lords of Waterdeep, Mint Works, Stone Age, and Targi.

What Should I Pledge?:
$51 Goetia: Nine Kings of Solomon: includes a copy of the game and all unlocked stretch goals.

KS Exclusives
The whole game is a KS-Exclusive. That’s because this is a first-published design from Kristian Karlberg, and he’s publishing the game himself. Sure, there’s some tiny outside chance the game gets picked up by a publisher at some point and re-reprinted, but that’s unlikely. And Karlberg knows it. For now, Karlberg is self-publishing, taking on the blood, sweat, and tears of a personal pet project. He’s not out trying to make a quick buck; he’s literally putting it all on the line to try to establish a career for himself.

In general, Think Outside the Board tries to take some of the risk out of Kickstarter for our readers. That means we’re often showcasing games from major publishers. By definition there’s less risk involved, because larger publishers can soak up losses in ways that a lone individual or tiny company can not, especially when they’re just starting out.

But we also like to support smaller companies and designers who need and deserve the help. Hopefully as the site grows, we’ll be able to help more. So know that, by definition, this project is higher risk than some. And it’s labelled as such. Similarly, we’ve also recently profiled Reach & Okazaki from Patrick Engro. And it was our great pleasure to profile Crystallo from Liberty Kifer last May, back in Kickstart This! #22. And then there was Jason Brooks’ Legacies, with a Kickstarter so polished and professional-looking you hardly would have known it was by a first-time designer self-publishing. There have been many other exceptions mixed in along the way. And when we do profile an independently-produced game from a budding designer, we do it because the designer deserves the recommendation, and could really use the support. If talented game designers like these are able to make their games, we all win together.