Kickstart This! #188: Rival Restaurants: Back for Seconds 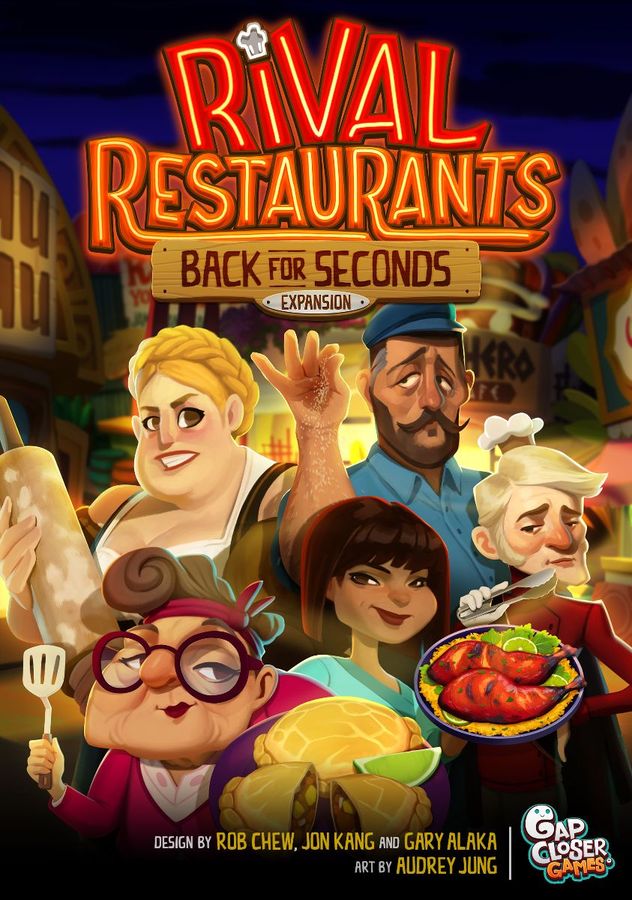 Funding Status:  At the time of this posting, Rival Restaurants: Back for Seconds is already fully-funded. Pledges currently total more than 15x the initial funding goal, with 4 days left to go on the campaign!

What It’s About:  “A board game about competitive restaurant owning. Use your chef’s power, cook recipes, and lead your restaurant to gastronomical glory. Rival Restaurants’s first-ever expansion, Back For Seconds, includes 8 new chefs, 6 additional restaurants, 9 new action cards, and an Event Deck.”

How It Works:   “Rival Restaurants is a chaotic, fast-paced, strategy and negotiating game that pits aspiring restuarant owners against one another as they race to be crowned ‘The Weiner!'”

“Unlike in many games where you have to wait for your turn, in Rival Restaurants, it’s always your turn. That’s because in the restaurant world, time waits for no one!” Gameplay is divided into Days, with each Day separated into 3 Phases: Money and Move, Buy and Barter, and Cook and Counter. The game is a race to 20 Popularity Points, and whoever gets there first wins the game. If more than 1 player reaches 20 Popularity Points in the same day, then whoever ends the day with the most Points wins. Ties are broken by the player who cooked the most Gourmet Recipes, and then by the play with the most money remaining.

During the Money and Move Phase, players each take $300 from the bank and use their movement wheel to choose where to go. Players then move their Chef Standee to their desired location, and if 2 or more players have chosen the same location, a Bidding War ensues. Whoever agrees to bid the highest wins the location, and players may also agree to draw any number of garbage to break a tie bid. If no player outbids the other, none of the chefs may use the location that day. Players may drop out of a Bidding War at any time; the last player remaining in a Bidding War must buy the ingredient for the last price that player bid. One location, The Island, is where players can buy action cards, buy upgrades, dispose of garbage, and sell chocolate.

During Buying and Bartering, players have 1 minute to buy as many ingredients from their current location, as well as barter with other players, trading money, ingredients, action cards, garbage, recipes, upgrades, and favors. At the end of the minute, players move their Chef back to their restaurants.

During Cooking and Countering, Chefs may cook any recipes for which they have all of the ingredients, scoring Cuisine Bonuses and Garbage Penalties. After players have cooked their recipes, they’ll accumulate garbage, flip over any cooked recipes, draw new recipes of the same type cooked, and use level up bonuses. Then they’ll Restock the counters for each market, and rinse and repeat the 3 Phases on the next Day.

Comparisons:  Rival Restaurants incorporates real-time in the Buying and Bartering Phase, and consequently begs comparison to another real-time cooking game, Kitchen Rush. Both games are also of a similar medium-light complexity. Some other food-themed games include A Feast for Odin, Food Chain Magnate, Morels, New York Slice, Scoville, Sushi Go!, and Wasabi!.

Add-Ons:
$18 Retail to Deluxe Upgrade Pack: featuring Acrylic Coins and Garbage Tokens, 6 Kickstarter-Exclusive Action Cards, and the ability to increase the max. player count from 6 to 8.
$20 Sleeves: 200 Poker-Sized Sleeves.
$45 Bento Box: a custom wooden insert that slots into the base game but holds the components for both the base game and the Back for Seconds expansion, sleeved cards included.

KS Exclusives
The Deluxe Edition is a KS-Exclusive, as are the Gourmet Bundle and the AYCE. So are the 6 Kickstarter-Exclusive Action Cards. The Deluxe Edition includes upgraded components like acrylic coins and tokens (upgraded from chipboard). Also, the Kickstarter version of the game comes with additional movement wheels, guides, point sliders, and upgrade clips to accommodate up to 8 players; the regular retail edition only plays to 6.

Rival Restaurants: Back for Seconds completes its Kickstarter on Tuesday, March 17th and tentatively ships in November 2020.