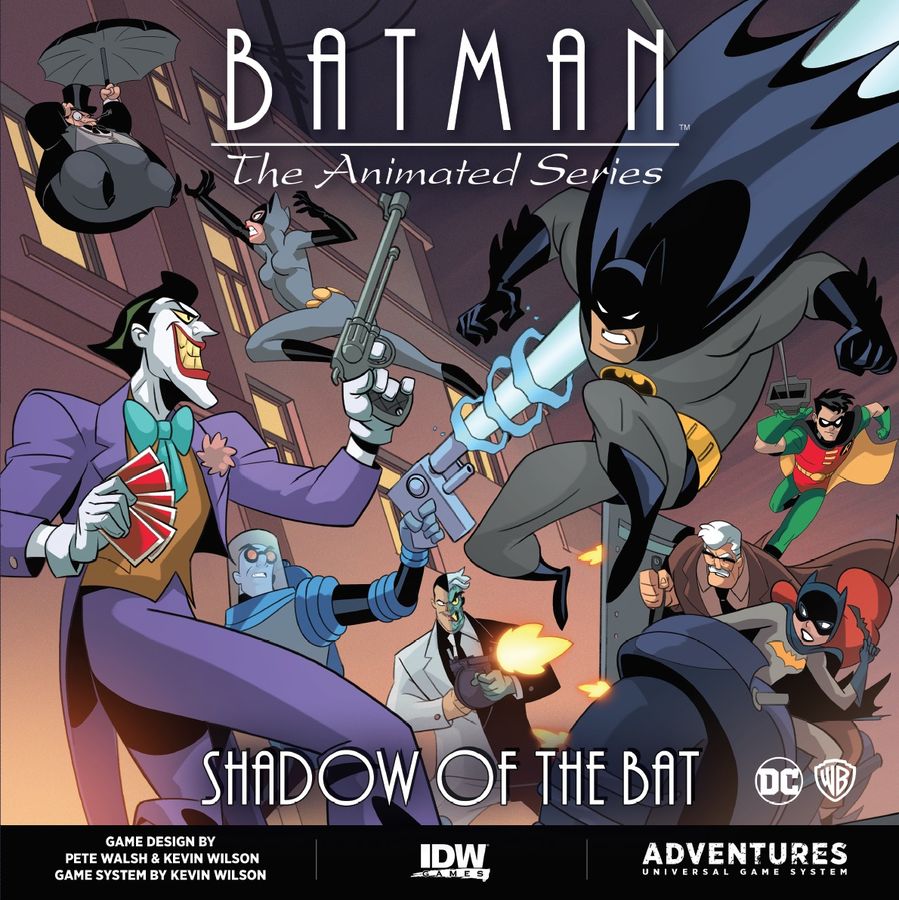 Funding Status:  At the time of this posting, Batman: The Animated Series Adventures is already fully-funded. Pledges currently total more than 5x the initial funding goal, with 6 days left to go on the campaign.

What It’s About:  “Running off IDW Games’ miniatures-driven ‘Adventures Universal Game System’ (AUGS) engine, Batman: The Animated Series Adventures – Shadow of the Bat allows players to take the role of any hero in their roster in the game’s 24 unique missions, which are all inspired by fan-favorite episodes. Even villains can be swapped out in every mission to change up the threats that players will face.”

How It Works:  “Shadow of the Bat features 24 unique scenarios, based on fan-favorite episodes from the show and using the AUGS’ flexible game engine.” While individual scenarios feature different goals, the game’s mechanics are generally the same from scenario to scenario.

“Each hero in Batman: The Animated Series Adventures comes with their own set of 3 custom dice, which are rolled at the start of the round and determine what actions that hero will be able to take on their turn. After rolling, players will need to discuss their results and organize their dice, as the dice placed on the left and right of each set determine what actions will be shared with neighboring heroes. Table talk and strategy is essential if the heroes want to succeed.”

“New to Batman: The Animated Series Adventures are gadget cards. As an offshoot of skill cards, players can choose to bring gadget cards into battle with them instead of one of their standard hero skill cards. Gadgets provide a ton of tactical choices when building out a hero before entering a battle. Players can combo gadget cards together to stifle the villain’s plans, such as using the grappling hook to pull yourself and an ally to the entrance of a building, then dropping smoke bombs to break their hired guns’ line of sight.”

Also new is the commander hero type. While Commissioner Gordon can’t make use of the gadgets that Batman, Robin, and Batgirl can, he does always enter battle with 2 GCPD cops. Able to command these two cops, Gordon is unlike any other hero as he can use these additional miniatures to lay down covering fire, split their movement up to flank enemies, or reach objectives. He can even upgrade his beat cops and bring in the hardened detectives Renee Montoya and Harvey Bullock.”

“In cooperative mode, 1-4 players work together to accomplish objective and defeat the villain in any of the game’s 24 battles. Turn order and A.I. villain activations are controlled by an initiative deck, causing each round to play out differently. A.I. villains are controlled by simple rules on their villain sheets that even include special actions, allowing A.I. villains to behave like their animated counterparts.”

“Players looking to satiate their villainous side can take control of the villains directly. In competitive mode, 2-5 players take on the game’s 24 battles, with one player playing as the villain. With an asymmetrical play style to the heroes, villains control their minions using a deck of cards. On their turn, the villain player selects a card from their hand and plays it into their tableau. That card grants them an action to take immediately, as well as ongoing effects. Unlike heroes, who must roll their dice and strategize together, the villain player must manage their hand and choose when to play cards based on the board’s current state.”

“A new feature introduced in Shadow of the Bat is the Dark Knight mode. Named after the formidable Dark Knight himself, this mode allows a player to play as a more powerful version of the caped crusader. Because of this additional power, Dark Knight Batman is built to be played as a solo hero. This allows the game to be played in either cooperative mode as a true single-player experience, or in competitive mode where 2 players go head to head with one player controlling the villains and the other controlling a single hero.”

Comparisons:  Teenage Mutant Ninja Turtles Adventures: Change is Constant and Teenage Mutant Ninja Turtles Adventures: City Fall. In fact, the new Batman: The Animated Series Adventures – Shadow of the Bat and its expansions runs on the same game engine with the same mechanics, so the elements from each of the 3 games can be integrated with each other. Apart from TMNT, a couple of good comparisons are Marvel United and Dice Throne Adventures. Or Batman: Gotham City Chronicles, but simpler, less fiddly, and more streamlined.

KS Exclusives
The Alfred Pennyworth Ally Mini, The New Batman Adventures Character Pack, Mask of the Phantasm Story Pack, and Mystery of the Batwoman Story Pack, Villain Upgrade Pack, Duplicant Villain Pack, and Additional Villain Dice are all KS-Exclusives. The only thing not KS-Exclusive are the base game and Arkham Asylum Expansion.