Kickstart This! #173: The Rival Networks 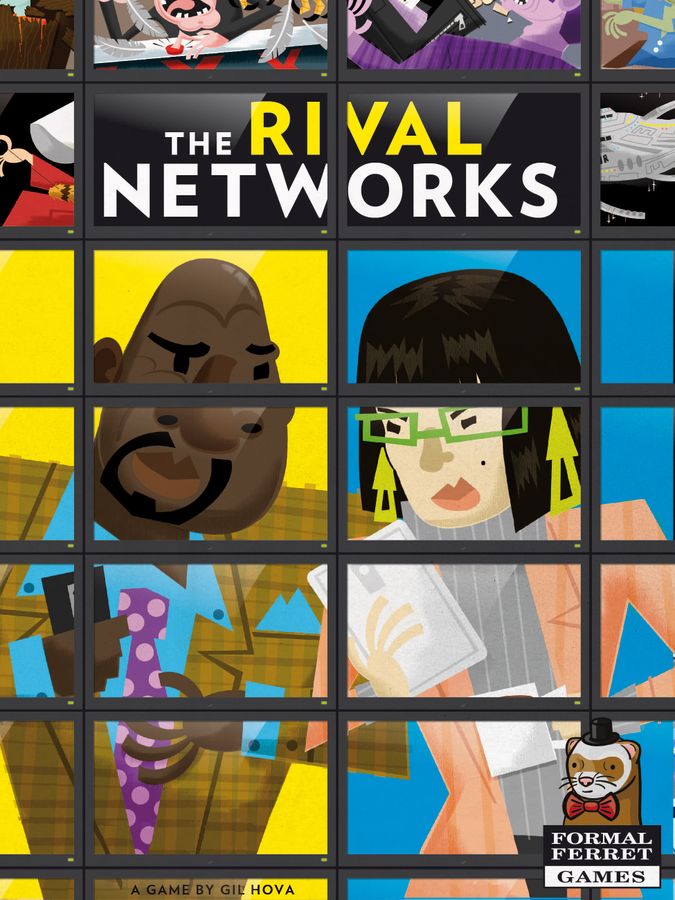 Funding Status:  At the time of this posting, The Rival Networks is already fully-funded. Pledges currently total more than 1.5x the initial funding goal, with 4 days left to go on the campaign.

What It’s About:  “The Rival Networks is a standalone two-player version of The Networks. You and your opponent are new television networks, and you need new programming. For this, you’ll need Shows, Stars, and Ads. Finally, shows age and viewers lose interest, so you have to keep your line-up fresh by canceling shows and sending them into reruns. Fortunately, you can get viewers from your reruns, and you’ll get bonuses if you get a lot of shows of the same genre throughout the game.”

How It Works:  “The Rival Networks is a standalone 2-player version of The Networks. You do not need to have played The Networks to play this game. In The Rival Networks, you’ll take turns improving your Network’s most important prime time slots. On your turn, you’ll develop a Show, and sign a Star and an Ad. Shows and Stars give you Ratings Points, which turn into Viewers. You’ll use Ads to buy powerful Network Cards that offer useful powers.”

On a player’s turn, they’re always able to Buy Network Cards and Play Network Cards as much as they want to and are able. Additionally, players will perform the following three actions on their turn, in any order: Develop a Show, Sign a Star and an Ad, and Attach Stars to a Show (this last one is optional).

To Develop a Show, the active player takes one of the 3 Show Cards from the Show Display and places it in their Lineup (which immediately cancels the previous show in that time slot, dismisses any attached Stars, and the cancelled Show is moved to the player’s Reruns Area). The Rating Points token for that time slot is also reset, to zero. Also, if the new show is at least the third show in the same genre as currently airing shows and reruns combined, the player will score a Genre Bonus.

Players can then Attach as many Stars to a Show from their Green Room as they like, but each of them must have Genre Icons matching those of the show in question. Stars will advance the player’s Rating Points token along the Rating Points track, which will net them Viewer Chips as they pass Viewer Icons.

There are 3 Season End cards shuffled into the Show Deck. Each time a Season End card appears in the Show Display, it’s available for players to take like any other Show Card. Once a player takes it, the Season ends at the end of that player’s turn. If one player is leading in Ratings Points in more times slots than the other, they’ll receive a Viewer Chip for each of those slots. The Trailing Player draws one Star from the Star Deck and places it in their Green Room. Players will also score any Goal Cards in play at the end of each Season.

Comparisons: The obvious comparison here is The Networks, Gil Hova’s 1-5 player, television-themed drafting/set collection game. As 7 Wonders Duel is to 7 Wonders, as Caverna: Cave vs. Cave is to Caverna: The Cave Farmers, as Le Havre: The Inland Port is to Le Havre, and as Agricola: All Creatures Big and Small is to Agricola… so is The Rival Networks to The Networks; in a nutshell, a 2-player version of an already successful multi-player game. If you’re more specifically interested in the theme of running an entertainment company, Movie Empire’s Kickstarter ships shortly, and the game may hit retail soon.

What Should I Pledge?:
$34 Viewer: a copy of The Rival Networks, including stretch goals.

All-In Total: In the continental U.S., you’re looking at $34 for the standalone The Rival Networks, plus $9 in shipping for a total of $43.

The Rival Networks completes its Kickstarter on Friday, February 14th and tentatively ships in December 2020.