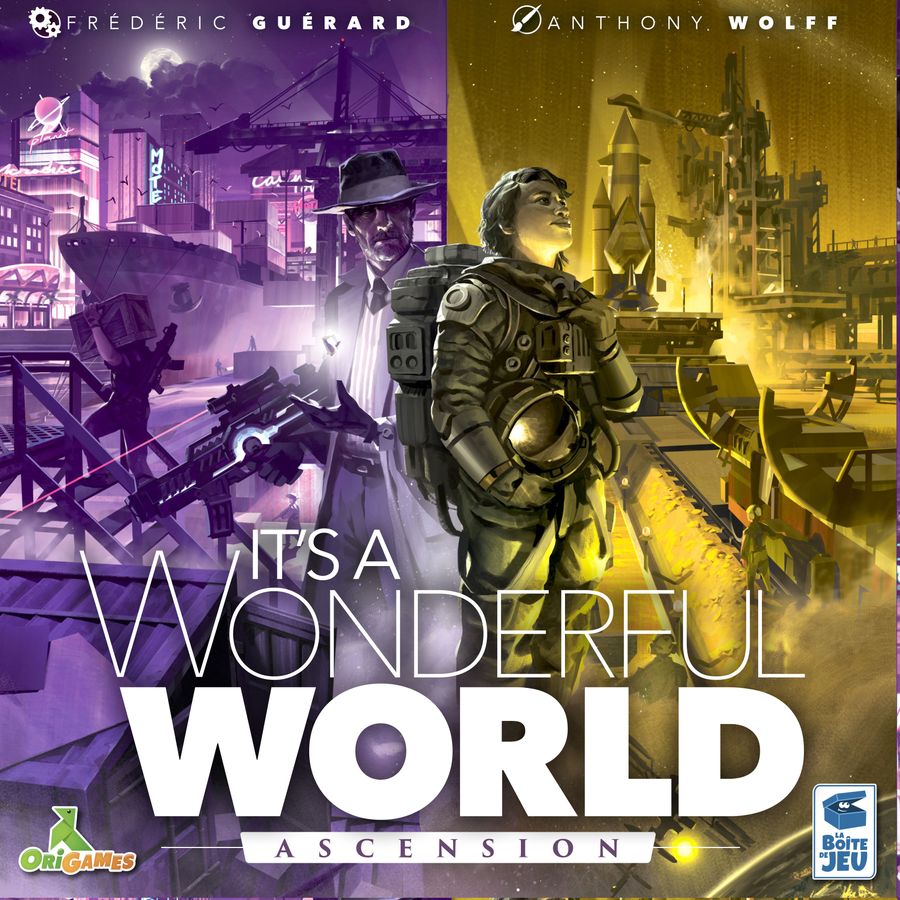 Funding Status:  At the time of this posting, It’s a Wonderful World Ascension is already fully-funded. Pledges currently total more than 15x the initial funding goal, with almost 6 days left to go on the campaign!

What It’s About:  “It’s a Wonderful World is a card drafting and engine building game where players draft 7 cards and then choose which ones to recycle (to immediately acquire Resources) and which ones to keep (for Construction, producing Resources and/or gaining victory points each round). Ascension cards introduce new ways to play, most notably through pair scoring and corruption, and also allows play with up to 6 players.

How It Works:  “In It’s a Wonderful World, you are an expanding Empire that must choose your path to your future, and must develop faster and better than your competitors. The game lasts 4 Rounds. Each round, you will draft cards that you will use to produce Resources and develop your Empire. After having chosen your hand of cards, you can recycle some of them to acquire Resources immediately, or slate them for construction to produce Resources each round and/or gain victory points.”

Each round is comprised of a Draft Phase, Planning Phase, and Production Phase. The Draft Phase mimics the one in 7 Wonders and many other card drafting games. Each player receives a hand of 7 cards, takes one, and passes the rest to the left or right (the direction alternates each round). They’ll then receive 6 cards, take one from that group, and pass it on. Rinse & repeat until each player has a selected hand of 7 cards and there are no more cards being passed around.

During the Planning Phase, players decide which of their cards to slate for Construction, and which cards to Recycle (discard) for the card’s Recycling Bonus.

During the Production Phase, each of the 5 types of resources will trigger in order. The player who produces the most of each type of Resource also receives a Supremacy Bonus, and all players will use the 5 resources being generated by their already-constructed buildings to construct their cards/building that are currently under construction. Once a card contains the correct resources, the player returns the cubes on it to the supply, and collects the card’s construction bonus. Players need to plan accordingly though, because unused cubes (like the ones on buildings that did not complete construction) are discarded at the end of the Phase.

There are also 2 separate 5-game campaigns in the Heritage Edition, which adds additional cards to the game after a first play. This gives each campaign a Legacy feel during that first play, without including destructive elements so that the campaigns themselves are fully replayable.

With the Ascension expansion, “players will play a mixture of classic Development cards and Ascension cards each round. Ascension cards introduce new ways to play, most notably through end-game pair scoring and corruption. This new deck also allows you to play with up to 6 players.”

Comparisons:  At its core, It’s a Wonderful World is a combination resource management (with some smartly produced components) and card drafting game. Similar games in the genre include 7 Wonders, the Century series, Concordia, Shipwrights of the North Sea, Terraforming Mars (although TM has an admittedly larger grab bag of mechanics and a larger table presence), and Wingspan.

KS Exclusives
The Leisure and Decadence Expansion, Exclusive Pack, and Heritage Edition from the first campaign will continue to be KS-Exclusives not available at retail. This campaign includes a Secret Box compatible with Leisure and Decadence, as well as a Storage Box for the Ascension components that slots into the Heritage Edition, and both of these items are KS-Exclusives that will not be available at retail.