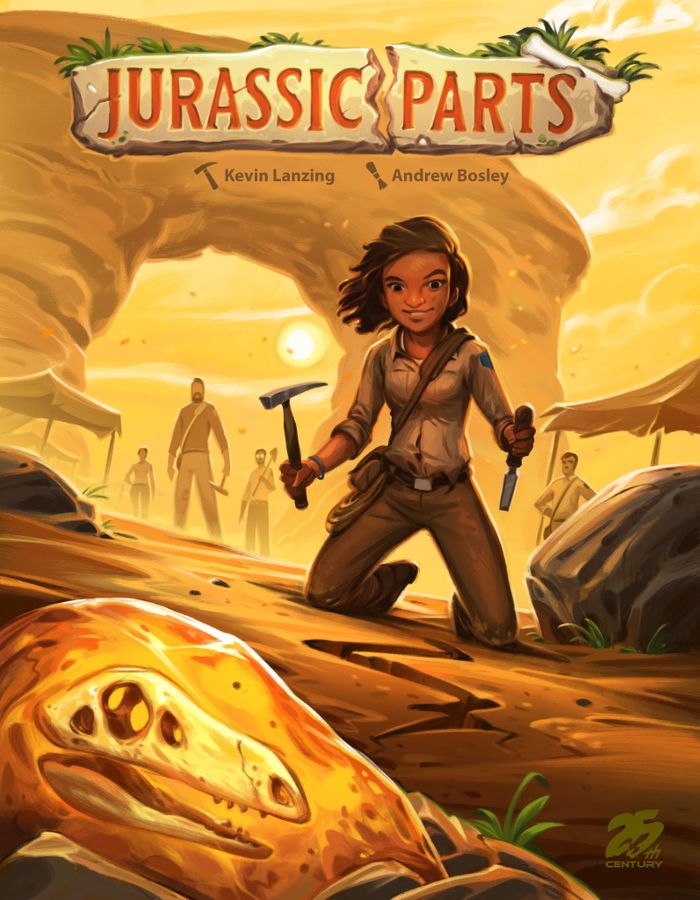 Funding Status:  At the time of this posting, Jurassic Parts is already fully-funded. Pledges currently total more than 2x the initial funding goal, with 6 days to go on the campaign.

How It Works:  “Jurassic Parts is a game of area control for 2-4 players. All players have access to the same slab of rock. The goal is to split it apart and claim complete dinosaur skeletons.”

“On a player’s turn they will move three Chisels of their color from the Dull side of the player board to the Sharp side.  If this is not possible (ie: there are not enough dull Chisels to sharpen), they move what they can and draw the remainder.”

“Sharp Chisels may be played to the Field. Any space between two Fossil cards is a valid space to play a Chisel.  Spaces beside only one Fossil (i.e. the edge of the Field slab) are not valid spaces. When a Chisel is played to the Slab, it becomes a crack. As cracks accumulate, the Field moves closer to breaking into two pieces.  When, where, and how the Field breaks determines who gets which Fossils, and how many.  Chisels are played one at a time.  Should a break occur, you must resolve the break before continuing to place more Chisels onto the Field.”

“One Chisel may remain sharpened between turns. The remainder must be spent.”

Players may also Conduct Transactions with the Field Leader on their turn. This requires 1 Amber for the first purchase, 2 for the second, and 3 for the third. Transactions include being able to ignore any Rocks on the next 2 Chisel placements, sharpening 2 additional Chisels, taking any fossil from the Field excluding the Bone Pile or a fossil that would cause a split, and taking any fossil from the Field Leader.

Whenever a player completes a Dinosaur on their turn, they receive 1 Amber from the Field Leader, and score points based on the number of Fossil tiles making up the Dinosaur, according to this scale: 1 point for a 1-Fossil Dinosaur, 3 for 2, 5 for 3, 8 for 4, 11 for 5, 15 for 6, 20 for 7, and 26 points for an 8-Fossil Dinosaur. Once all of the Field tiles have been removed from the game, players score any remaining Dinosaurs or Plants by the same sliding scale. Unspent Amber are worth 1 point each, as are Fossil Tiles making up incomplete Dinosaurs. The player with the most points wins.

Comparisons:  The most obvious comparison is Fossilis, which ran on Kickstarter back in November. While both games are on the lighter side, Fossilis has a lot more plastic, and a lot more going into its component design. If you just like Dinosaurs, there’s Dinosaur Island, DinoGenics, Dominant Species, and the Apex Theropod Deck-Building Game to choose from. If you’re simply interested in games that pair area majority/influence with set collection, there’s Endeavor: Age of Sail, Rising Sun, Spirit Island, and Tigris & Euphrates, to name but a few.

What Should I Pledge?:
$29 Paleontologist: the game with all applicable stretch goals.

All-In Total: In the continental U.S., you’re looking at $29 for the Paleontologist pledge plus $7 in shipping for a total of $36.